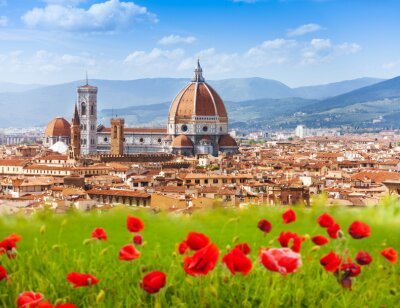 Originally a Roman city, Florence captivates the imaginations of visitors as few European cities do. It is the capital of Italy’s Tuscany region and a UNESCO World Heritage Site. Florence is known as the ‘cradle of the Renaissance’ due to the staggering number of churches, monuments and works of cultural significance that are seemingly around each and every corner.

Roughly 1,500,000 people call greater metropolitan Florence home, 400,000 of them live in the city itself. But that’s nothing compared to the tourist population. Visitors outnumber locals from April to October. During this time, spotting a local is a feat in and of itself. But with plazas and squares in abundance, and tasty, locally made Chianti wine available for purchase, there’s good reason to simply sit back and observe the city’s diverse crowds. So grab your beverage of choice, find a seat at one of our favorite spots for people watching, and then watch the people go by.

This may be the most breathtaking square, not just in Italy, but in all of Europe. Between the staggering number of significant buildings and throngs of people, there’s always something interesting to gaze upon. Located smack dab in the middle of historic Florence, Il Duomo di Firenze, or the Basilica of Saint Mary of the Flower, is the main draw, with its huge domed roof that beckons all in the city to visit. Featuring the largest brick dome roof ever constructed, the cathedral attracts tourists of every type, making this a prime location for people watching.

And if that weren’t enough to pull in visitors, there’s also Cupola del Brunelleshchi, the Opera del Duomo Museum, the Archivescovile and Canonici’s Palace, and the Loggia del Bigallo, to name but a few of the famous buildings that call the larger piazza home. There’s not a bad seat here, so pick an ancient concrete slab, then sit and marvel at Florence’s human pulse.

Perhaps the best spot to see locals doing their thing, the Piazza della Signoria is the long-standing political center of the city, so there’s always someone and something to see. The most famous building is the 14th-century Palazzo Vecchio with its tower that looks over the L-shaped square. A host of other significant buildings call the piazza home such as Loggia della Signoria, Palazzo Uguccioni, the Palace of the Assicurazioni Generali and the very popular Uffizi Gallery.

As you watch people going to and fro, remember this is where Girolamo SavonarolaIn and his followers famously burned fine clothes, books and other written works in 1497 during the Bonfire of the Vanities. From hangings to celebrations, few spots have the same historical legacy or make a better spot for observing daily life in Florence than Piazza della Signoria.

You could call this a ‘new’ area of Florence, as it was designed in 1869 by architect Giuseppe Poggi as part of the city’s urban renewal. Overlooking the city below, it’s perhaps Florence’s most famous viewpoint and also one of the best spots to people watch. The eight-kilometer, tree-lined Viale de Colli brings cars up the hill and terminates at the square itself, where copies of Michelangelo’s works can be found, including his renowned David statue (though the original can be seen at the Galleria dell’Accademia).

Il Duomo di Firenze’s domed roof prominently stands out below, as do the hills of Settignano and Fiesole behind the city, creating a postcard-like backdrop. To see even more characters, take a more local route, and access the square via the stairs known as the Poggi Ramps from Piazza Giuseppe Poggi below.

These are just a few top spots in Florence where a traveler can take a break and watch citizens of the world pass by. But this is just the tip of the iceberg. There are plenty more great spots, and the best way to find them is to explore the city on your own.