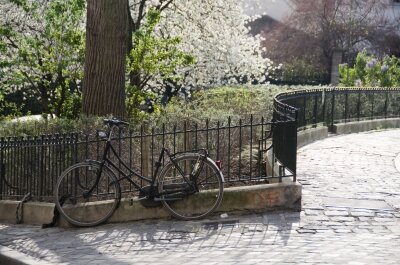 Getting around is a pleasure in Paris—especially if you’re into cycling or cruising the River Seine. But in even more practical terms, this is a city that knows how to organize public transport. Between the metro, light rail, tram and bus lines, you’re able to get anywhere in the city center on relatively short notice. And in all honesty, even walking is a pleasure in a city that’s as chock full of attractions as this.

For transport purposes, the city is divided into six different zones (though you’ll probably be spending most of your time in Zones 1 and 2). Metro tickets can purchased from vending machines in the stations and also provide access to buses and trams. Save money by buying them in bundles of ten (called a carnet), or you can even pick up daily or weekly passes. The Paris Visite pass is intended especially for tourists.

Metro: With 14 major lines, two secondary ones and a whopping 301 stations, the Paris metro is really all you need to get around this city. It’s fast, convenient and relatively safe. Each line is colored and numbered, and signs clearly display the name of terminus for a given line in a particular direction.

The tangle of metro lines crisscrossing Paris can seem overwhelming, but taking advantage of the metro is relatively straightforward. Just make sure that you don’t follow the signs for exit (sortie) when what you really wanted to do was catch a transfer (correspondance) to another line.

A single ticket allows one ride between any two metro stations, regardless of how many transfers you make in the process. However, the entirety of this one-way journey needs to be completed within 90 minutes. You can also purchase a Mobilis ticket, which allows unlimited travel within specific zones for a full day.

Light Rail: The Réseau Express Régional (RER) train is a commuter network that also serves the city center. It’s actually faster than the metro, though it doesn’t stop at nearly as many stations. Within Zone 1, you can board an RER train as a transfer from the metro. For tourists’ purposes, the RER is more convenient than the metro for visiting the Panthéon and the Eiffel Tower.

Buses: If you feel like the metro is depriving you of sightseeing opportunities, hop on a bus and see the city while you travel. They use the same ticketing system as the metro, but you can also purchase a ticket from the driver. Just remember that tickets purchased from the driver don’t allow for any transfers.

Tram: Trams went out of Parisian fashion in the 1950s, but they’re creeping back on the scene now. There are three lines, and they technically operate as part of the bus network. If you’re here for the sights of Paris, you probably won’t have much reason to board a tram, as they operate on the fringes of the city.

Taxis: Paris is serviced by roughly 15,500 taxis, which honestly sounds like a lot. It’s not. Flagging one down can be a challenge. They come in all colors, but just make sure you stick to the licensed cabs (displaying a ‘Taxis Parisiens’ sign on top).

Boat: The Batobus cruises the Seine and takes a hop-on, hop-off approach to stopping by riverside attractions. Boats stop at Notre Dame, the Louvre, the Eiffel Tower, Champs-Élysées and a few other tourist attractions, so you can easily plan a day of sightseeing along the river. Tickets are only sold as day passes.

Bicycle: A lot of cities around the world have tried out public cycling schemes, but Paris nailed it with Vélib’. Even the name is awesome—a contraction of vélo (bicycle) and liberté (freedom). The city has more than 1,450 stations, which works out to one every 300 meters. You have to open an account with a credit card and put down a refundable €150 deposit. Then it’s only a matter of picking up a bike from one station and dropping it at any other. The first 30 minutes are free and after that you pay a modest hourly rate deducted from your card.