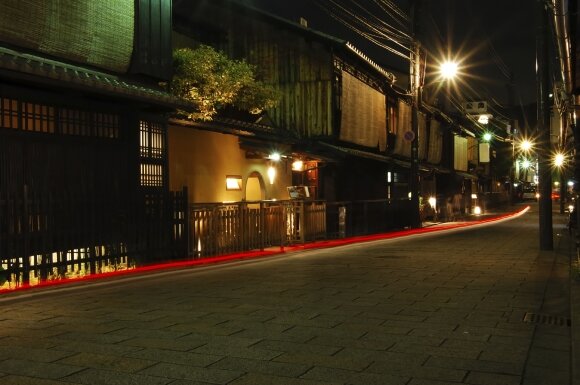 Kyoto is a Japanese city unlike any other. Modern office towers and a city center sit next to one of the highest concentrations of UNESCO World Heritage Sites on earth, somehow in perfect harmony. Business people do their thing while monks tend to their temples and visitors marvel at it all. Perhaps this shouldn't be a surprise as most of the stunning temples that dot the city's landscape are all about peace and tranquility at their heart.

The city is also home to real geishas who manage to live highly traditional lives, going to and from in their kimonos as they have for thousands of years, seemingly unaware of the modern world around them. This is a place where different worlds literally intersect, collide, and work well together, creating a fantastically rich social canvas to watch go by. Kyoto is a fascinating city, but also a wonderful spot to slow down, take a seat, and watch its people live their lives. Here are three of our favorite spots to get a sense of the social fabric of this most traditional of Japanese cities and watch its people live their lives.

You likely know this district from the famous Hollywood movie Memoirs of a Geisha, but in real life it’s everything you’ve imagined and then some. Simply put it's the most famous area in all of Japan for geiko, the Japanese word for geishas – real ones – who hail from Kyoto and have dedicated their lives to this living art form. Spend a couple hours wandering Gion’s pleasant narrow lanes and you’re sure to spot one, usually darting to and fro as they try to avoid tourists’ cameras. If you thought the British paparazzi were bad, wait until you see a busload of tourist come upon a geiko and you’ll appreciate how difficult their lives must be in a modern world.

The area underwent a restoration project not long ago, putting all wires and utilities underground, making it even more beautiful and helping it retain its traditional, architectural charm. Pick pretty much any corner or narrow lane; grab a Japanese beverage, and marvel at the broad variety of people plying the streets. You’ll see plenty of tourists from around the world but also spot high-flying businessmen on their way to restaurants to ink high value deals. Mix in traditional geiko wearing their splendidly colorful kimonos and you’ll be smiling ear-to-ear.

Another fine place to watch a wide swath of tourists from around the world is famous Kiyomizu-zaka, a lane comprised of stairs on the way to Kiyomizu Temple. Throngs of tourists ply the route, stopping along the way to indulge in tea, a drink, ice cream, or shop for souvenirs. It’s one of the liveliest thoroughfares in the city – perfect for people watching.

Anyone who lives in Kyoto eventually ends up passing through the teeming mass that is Kyoto Station, the country’s second largest station building (after Nagoya Station). If people are coming or going from the city they’ve either been here or have likely stopped in to do some shopping, hang out, or see a movie. This 15-storey building houses a department store, entertainment complexes, and several local government facilities. It’s huge!

Opened in 1997 to commemorate the city’s 1,200th anniversary, it’s a testament to modernity in a city that’s largely celebrated for its historic past. Grab a bench and watch Japanese schoolgirls in uniform mix with businessmen, lost tourists, and a plethora of people from around the country heading off on adventures of all kinds.

While tourist and souvenir shops are moving in, this is still Kyoto’s largest traditional food market and a top spot to see housewives doing their daily thing: stocking up for that next fantastically delicious family meal. This shotengai traditional shopping street, which seems to stretch to infinity, manages to retain its old world charm while at the same time incorporating some modern touches. You’ll see people shopping for everything from fresh tofu to vegetables to tea and even whale meat (although that’s becoming increasingly rare to find). Grab a yakitori stick, some freshly cut sashimi, and marvel at the city’s people doing their thing as they’ve done for thousands of years. This is people watching heaven!