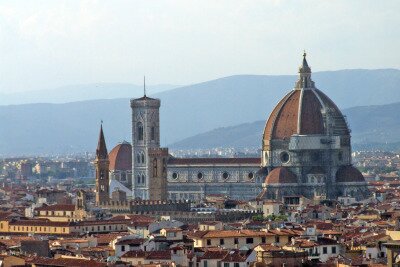 It’s safe to say that Florence is one of the most amazing cities in all of Italy. Apart from the most popular reasons to visit Italy – to taste the food and gaze upon the architecture – there are plenty of spectacular sites and attractions around Florence that stimulate and charm the other senses.

If you weren’t already aware, the skyline of Florence is dominated by a gigantic church. This is the Basilica di Santa Maria del Fiore, more commonly called the Duomo. It’s an impressive behemoth of architectural brilliance and religious iconography that never fails to impress. The Duomo is as impressive today as it was when it opened in 1436 after 140 years of construction. Once you’re done gawking at the exterior take a stroll inside to see an entirely new side of the famous structure. If heights don’t phase you, you can climb up the inside of the Duomo to examine the intricate paintings up close and personal, and get an amazing view of the surrounding city from the observation deck.

Traveler Protip: The Duomo is the perfect landmark when navigating your way around town, as it’s almost always visible and lies roughly in the centre of town.

Michelangelo’s David is one of the main draws of Florence, and rightly so. Back in 1501 the Florentine authorities asked a young artist called Michelangelo to carve a statue of Biblical hero David. They couldn’t know at the time that he would end up creating one of the world’s foremost artistic masterpieces, and one that still stands proud today – all 16 feet of it! When it was first unveiled it stood outside in the Palazzo della Signoria – now home to a replica – but the original was moved to the Accademia Gallery. It’s artistically unique – the hands and head larger than they should be, and the pose and facial expression differ from similar styles of the day. Be careful – in 1991 the statue was attacked by a hammer-wielding man who damaged some toes on the left foot, so don’t be surprised if the guards are watching everyone extra closely!

If there’s one thing Florence has in spades, it’s old and beautiful relics of bygone eras. One of the most impressive of these is also one of the most famous museums in the western world, the Uffizi Gallery. Not only is the artwork housed in the Uffizi outstanding – everyone from Boticelli to da Vince to Raphael to Caravaggio is on display – but the building itself is a work of art in its own right. Indeed, some say its decorated hallways and intricate ceiling often eclipse the artwork! Traveler Protip: Book your tickets in advance, as the line-ups, particularly in spring/summer, can be hours long.

If you like covered, medieval bridges (and let’s be honest, who doesn’t?) Ponte Vecchio is for you. Originally built by the Romans before being destroyed by flood, rebuilt, swept away by another flood and rebuilt again in 1345, the bridge is one of the real gems of Florence. Chock full of jewellery stores, trinket shops and dealers of object d’art, spending too much time on the Ponte Vecchio will surely result in a lighter purse. Traveler Protip: The covered passageway along the east side of the bridge is called the Vasari Corridor. It was built in 1564 so the powerful Medici family could walk from their house (the Uffuzi) to the Pitti Palace while avoiding the narrow, crowded bridge – the perfect place for an assassin to hide.

If you’re looking for an amazing view of Florence, you can’t get any better than the one from Piazzale Michelangelo, built on a hill on the south side of the Arno River. Considering the centuries of history in the city, it’s a relatively new addition, only going back to 1869. Make sure your camera’s memory card has room, as the 180°+ view offers amazing vistas on all sides. Traveler Protip: Duck into one of the numerous wine shops along the way, purchase a nice bottle of Chianti – the regional wine from Tuscany – and set up in a prime position to watch the romantic Florentine sunset. Don’t forget the corkscrew!

Florence is one of the the most beautiful cities in all of Europe. So if you plan to go to Italy don't miss Florence and take your time to see more than all oft the must sees up there. It's Bealla Italia! :-)
May 11, 2014 |

Reiseblog
i have been visited all places above, and they were very beautiful. these a must-to-go place when you go to Europe
May 22, 2014 |