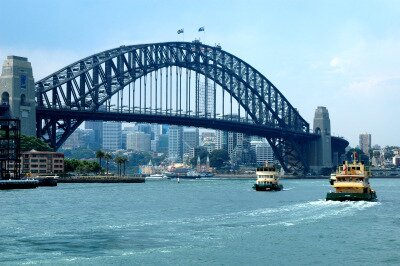 Sydney is a world-class city with a variety of public transport options you’ll need in motion. The offerings are a little bit underwhelming (though entirely adequate), with no dedicated underground service and LRT routes that keep opening, closing and opening again along new arteries. While you may hear locals complaining about the rising specter of traffic or a confounding shortage of taxis, the truth is that visitors don’t really feel the pinch when it comes to Sydney’s public transit woes. By all rights, the city has you covered via road, rail and sea.

If you're planning a go-wherever-you-feel-like tour of Sydney vs. a more regimented itinerary, you’ll almost certainly save money with the MyMulti Day Pass. Pay a flat rate and enjoy 24 hours’ access to all of the following:

Rail: Sydney had one of the largest tram networks in the world back in the early 1900s. However, a commonly held notion that trams contributed to congestion gave buses a chance to take over. The last Sydney tram delivered its final passenger in 1961.

Light rail returned to Sydney near the turn of the century, with a line connecting Central Station west to Wentworth Park. The city also operates a network of suburban rail lines that link the outlying communities with one or more of the seven city-center stations.

Trains have definitely made a comeback in Sydney, though it’s difficult to predict where all of this is going. The Metro Monorail closed in 2013 after 25 years of service. Today, the Inner West Light Rail (tagged as ‘L1’ on public transit maps) is faring well. It began as a link between Central Station and Pyrmont, but an extension that launched in March 2014 added nine new stops and carried service all the way to Dulwich Hill. From a visitor’s perspective, this line is useful for reaching Darling Harbour, the Fish Markets, Paddy’s Markets and Chinatown.

There’s also an airport rail link to and from Central Station, serving the domestic and international terminals.

Buses: Buses inherited Sydney’s old tram network. It may not be glamorous, but buses see to roughly half of all the public transport journeys (at least on weekdays). The routes are comprehensive and, for that reason, a little confusing. You’ll even see locals getting confused over which bus goes where. However, the system is efficient, and drivers can point you toward the best route to suit your journey.

Primary bus stops are located at Railway Square, Winyard Park and Circular Quay. This is the cheapest way to get around Sydney, and you can buy tickets as you board or in advance from Bus Transit Shops and newsagents. Note that express buses are marked with an ‘X’, while those marked with an ‘L’ make limited stops.

Taxis: They may not be the most economical mode of public transport in Sydney, but taxis are by far the most convenient. Vehicles queue in front of Sydney hotels as well as major depots such as Central Station and Circular Quay. All taxis run on the meter, and passengers are required to pay relevant road, tunnel and bridge tolls. A sample trip, from Circular Quay to Centennial Park (6km) will run approximately AUD $16 (USD $14.80).

Ferries: Circular Quay operates the primary ferry terminal, and vessels connect to wharfs around the harbor. The express ferry from Circular Quay to Manly takes less than 20 minutes to connect. Many of the ferry rides offer connecting bus services once you’re on land.

You can also charter water taxis on dedicated routes around the harbor. These operate 24 hours per day and can make for an atmospheric jaunt between harbor-side restaurants and sightseeing attractions.