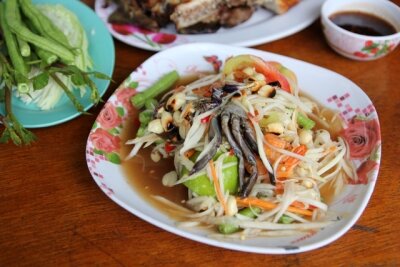 Thailand is a country with an incredibly diverse variation of regional dishes. At Thai restaurants outside Thailand, the food is often lumped into a single category: Thai cuisine. In Thailand however, you'll find that food at restaurants is often grouped by region, many restaurants only serving food from one particular region of Thai cuisine. While there are countless variations of Thai food by region, there are four main categories; Isaan northeastern, Lanna northern, Bangkok central, and southern Thai.

Isaan food, also known as the cuisine originating from the northeastern region of Thailand, is one of the most popular and widely consumed varieties of food in the entire country. Sticky rice, which is steamed and is much more glutinous than regular jasmine rice, is the main staple grain in Isaan. This variation of Thai cuisine includes lots of fresh vegetable & meat salads, as well as meat and fish often roasted over charcoal. Some popular examples include somtam, a combination of shredded green papaya, tomatoes, peanuts, chilies, garlic, fish sauce, fermented fish sauce (optional), lime juice, and palm sugar; kaw moo yang, grilled pork neck that’s sliced into bite sized pieces and served with a chili dipping sauce; larb moo, a salad of minced pork in a dressing of lime juice and chilies; and tom sap, a hot and sour soup.

Bangkok, the capital and largest city in Thailand, is a giant melting pot for Thai cuisine. Here you’ll find all variations, and even some restaurants that mix & match a few of their favorites from a variety of regional dishes. Pad kra pao is a dish that includes a choice of meat (usually pork, chicken, shrimp, or squid) stir fried with chilies, garlic, and a handful of Thai holy basil. It’s served over a plate of fresh steamed rice and is one of the most beloved and easy to prepare dishes in central Thailand. Other favorites include a variety of other stir fries, green and yellow curries, noodles like pad Thai or pad see ew, and soups like tom yum, which is most famously prepared with shrimp.

The former Kingdom of Lanna, present day northern Thailand, has a lengthy history of trade and migration with China, Myanmar, and India, which is seen in its unique variations on Thai cuisine. Pork is the most common meat, served within or used to flavor many of the popular dishes. Miang kam is a popular northern snack that consists of tiny bits of roasted coconut, shallots, ginger, chili, lime, peanuts, dry shrimp, and a dab of palm syrup, all wrapped into a bite sized Piper sarmentosum leaf (also known as wild betel). Sai ooah, a northern Thai sausage made from minced pork, chilies, and lemongrass, is another crowd pleaser. Other well-known northern Thai dishes include khao soi, yellow egg noodles in a rich coconut cream curry; kaeng hunglay, chunks of pork stewed in a sauce made from tamarind and palm sugar with a hint of masala spice; and nam prik ong, a chili sauce made from minced pork, tomato sauce, and garlic.

Southern Thai food is known for its fiery chilies, strong bites of sourness, and plenty of seafood. This regional variation of Thai cuisine has many similarities to Malaysian food, with lots of spicy soups and curries that use fish, prawns, and squid. The south of Thailand is famous for its use of coconut milk in curries, fresh turmeric root, kaffir lime leaves, and lots of chilies. Kaeng som is a sour soup made from turmeric root, lemongrass, chilies, and garlic, all boiled with slices of fish and a vegetable choice like bamboo shoots. Other popular southern Thai dishes include kaeng tai pla, a dark curry made with fish bladder; goong pad sataw, shrimp fried with stink beans; and kaeng neua, a beef curry made with rich coconut milk.

And if one wanted to dig even deeper, there are countless unique specialties in each village and town throughout Thailand. Bangkok, being a city where Thais come to work from around the country, offers the largest variety of regional Thai food, but in order to get the true taste of regional Thai dishes, it’s best to travel to a specific town or province for a taste of the most authentic flavors.