« Regional Variations in Thai Cuisine | Main | Valentine’s Day in Asia – is it a big deal? »
Wednesday 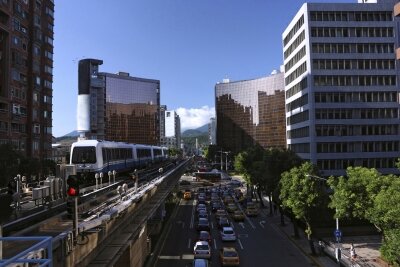 Thankfully, Taipei lacks the endless, jam-packed urban sprawls of other Asian cities like Beijing or Bangkok, but it still packs a punch when it comes to rush hour traffic and labyrinthine public transportation. For tourists going in with the mentality of “doing what the locals do,” and just copying a random commuter, they may find themselves on alternative lines of transit, which can range from cross-country trains to rentable tandem bikes, so…best to know exactly how things work before you dive in.

Bus & Tram: If you are not running on tight schedule, hitching a ride on the city’s long-established system of buses is not a problem at all. But when you’re bag in hand and frantically trying to reach a distant destination, you’d better think long and hard because once traffic congestion hits, your trip can easily start to stretch out into something decidedly tedious. Nonetheless, buses are easy to arrange and go everywhere, especially if you want to head outside of the city or along rural routes.

One thing that often stymies bus travelers in Taiwan is the question of whether to pay when they get on or as they get off. When in doubt, just follow the passengers ahead of you or look for the characters on the screen to the left of the driver. Single zone travel in Taipei will cost you NT15 (USD $0.50), and it goes up from there. You can also pay with the ubiquitous EasyCard (see below).

Metro: With around 1.74 million people using the Taipei Metro every day, the mass rapid transit system (MRT) is easily a local favorite. Currently, this system operates seven lines snaking throughout the greater Taipei area, playing a pivotal role in the city’s sustainability initiatives and cultural developments. Fares are based on distance, with a base fare of NT20 ($0.66) and the longest trip being NT65 ($2.15). Tourists who are staying a few days usually purchase an EasyCard, which can be reloaded and gives a 20% discount on MRT fares. Buy these cards at the service counter at any MRT station, and you’ll be well on your way to becoming one of the locals.

Taxi: Like most nations, taxis in Taiwan are a bright shade of yellow with a red and white “For Hire” sign displayed on the dashboard. The meter will start at NT70 ($2.30) for the first 1.25km, and every 300m after that will be an additional NT5 ($0.17). After midnight, the price rises slightly.

No need to worry about a language barrier when stepping into the cab because in order to obtain their license, all Taipei taxi drivers are required to pass an English exam, a definite plus for foreigners. Known for their relative affordability, cleanliness, and polite drivers, taxis are the ideal form of transformation in Taiwan, minus the traffic of course. You can either pay by cash or credit card, and the EasyCard can be used in most of them as well.

Airport Buses: Probably the best way to get into the city from Taoyuan International Airport is on one of the many buses that leave in regular intervals. Most stop at hotels and MRT stations along the way – just find an information counter to see what’s available.

Many thanks for sharing such useful info on Taipei city. Really a wonderful city to plan your vacation. Keep sharing. Thank you.
February 27, 2014 |