Hotels of Note: The Strand 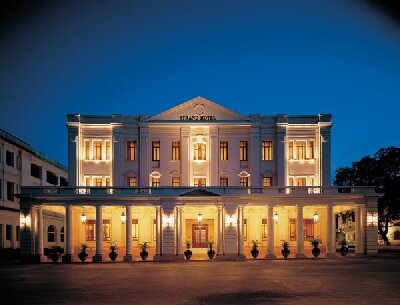 The Strand is one of a set of colonial-era hotels opened by the Sarkies, a band of Armenian brothers who boasted some of the finest handlebar moustaches the world has ever known. The Sarkie Brothers’ other two hotels – E&O on Penang and Raffles Hotel in Singapore – are better known because they stayed in operation while Burma was on geopolitical lockdown. But don’t let that turn you off of the Strand. An ambitious restoration project has returned it to its former glory, and it remains a quintessential tribute to Victorian-era luxury.

Hotel History
The Strand opened on the Yangon River in 1901. At that time, it was one of the most luxurious hotels in the British colonial empire, and 92 Strand Road quickly became one of the most prestigious addresses in Asia. However, the Sarkies Brothers sold the hotel to a local restaurateur in 1925, and the fate of the Strand took a turn.

During WWII, Japanese forces used the building to house their troops, and ownership ultimately transferred to a hotel group in Tokyo. The Japanese scored some points at this stage by opening the hotel to Burmese clientele for the first time in its history, but this moment of optimism was short-lived.

With independence came serious economic decline, and colonial architecture in Burma sat on the front lines of neglect. The Strand’s future looked dismal until the 1990s, when Regent hotel magnate Adrian Zecha initiated a restoration project. The result is one of the most authentic Victorian-era hotels in Asia.

Notable Guests
You’ll be in good company on the Strand’s guest register. Prince Edward stayed here during his visit to Yangon. Rudyard Kipling and Somerset Maugham were also patrons of the Strand. More recently, Mick Jagger, Oliver Stone and Pierre Cardin have all been guests.

Notable Features
The Strand’s expansive interior and white-washed façade were restored relatively recently. If anything, this gives the hotel an edge on other colonial-era attractions in the region. The lobby features rattan furniture, marble floors and teak-framed windows. One notable features is its lack of front desk for check in. Rather, guests are greeted upon entry and taken directly to their rooms. A personal butler waits outside the guestroom door 24 hours a day.

This three-storey Victorian mansion is located in downtown Yangon, a 20-minute walk from key attractions including Aung Sang Market, Chinatown and Sule Pagoda. It features 31 spacious, high-ceilinged rooms, dining at the Strand Grill and snacks at the Strand Café. One of the hotel’s signature features is its fashionable high tea in the afternoon. Honeycomb ice cream, jam tarts and an assortment of pastries are served.

The Strand purposely fends off modern distractions – you won’t find plasma TVs or iPod docks in the rooms, and there is no swimming pool on the premises. However, the hotel’s staid conservatism is a major part of its charm. Most guests wouldn’t have it any other way.

The Strand Today
The Strand remains a relic of a bygone age, and an evening here can easily end up as a highlight of your time spent in Yangon. Rooms at the Strand are relatively pricy, but there’s certainly a value-for-money factor at play – an experience of this caliber would cost much more at a luxury hotel in the West. As Burma continues opening up to travel and tourism, you can expect the Strand to remain one of the most celebrated hotels in the country.

And if a room at an evening at the Strand is not in your budget, it’s still worth stopping by. There’s plenty going on here for non-guests, including high tea in the afternoon and a popular happy hour at the bar on Friday evenings. The latter brings out NGO workers and expats in droves, a great opportunity to get some in-depth insights into life in this beautiful, crumbling city.