Hotels of Note: The Manila Hotel 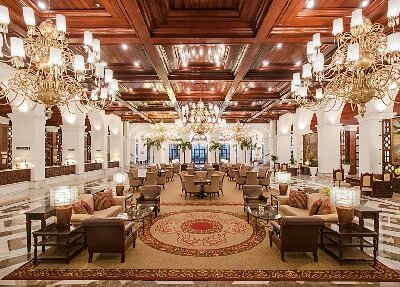 The Philippines is comprised of over 7,000 islands, which is a staggering amount of choice if you are an island lover. The most logical place to start a trip to the Philippines is the capital of Manila. Most international flights arrive here, and from Manila's Ninoy Aquino International Airport you can get to everywhere else. But before rushing off to those idyllic islands you may want to consider checking out the capital, and if you do you shouldn’t miss the majestic Manila Hotel.

The 570-room Manila Hotel opened in 1912, making it the oldest luxury hotel in the Philippines. It was a part of the plan to rebuild Manila when the US took over the Philippines from Spain in 1898, which included wide boulevards, stately buildings and elegant architecture. The grand design of the Manila Hotel matched this ambition well, and it was decided to place it next to Rizal Park.

The hotel was occupied by Japanese troops during World War II – that is, until American and Philippine forces launched the offensive that became the catastrophic Battle of Manila. Despite most of the city being destroyed, the hotel survived mostly intact. It returned to business after the war, and was expanded in 1976.

The hotel has seen its share of noted celebrities over the years, from authors James A. Michener and Ernest Hemingway, world leaders President John F. Kennedy and Prime Minister Sir Anthony Eden, musicians from The Beatles to Michael Jackson and actors such as Marlon Brando and John Wayne. The hotel is best known though for being the residence of General Douglas MacArthur. He didn't just pass through either - he lived here from 1935 to 1941, until Japanese forces took control of the Philippines in 1942. Such was his fondness of his penthouse suite that MacArthur personally led his men past machine gun fire to take back the hotel when the Allied forces launched an offensive that took back Manila in 1945. Today you can stay in the MacArthur suite, which includes three bedrooms. And just for the record, the General’s favorite hotel dish was lapu-lapu fish, wrapped in banana leaves.

In terms of location, the Manila Hotel is hard to beat. It is situated on Rizal Park, the principal park of the city, and at the beginning of Roxas Boulevard, which is the start of the Baywalk, a 2km stretch of pavement known for open-air cafes, music performances and couples walking hand-in-hand. Next to the hotel is the historic area of Intramuros, the original Spanish settlement established in the 16th century and fortified by stone walls. The walls were damaged during the Second World War but were reconstructed in the 1950's, when the city was declared a National Historical Monument. Much of the area inside the city was also destroyed but there are a handful of buildings that remain from the Spanish era.

SamFoex
Excellent!!! I wish I could go there at least for once. Thanks for discussing.
December 3, 2013 |