Overview of the side dishes that make a Korean meal complete 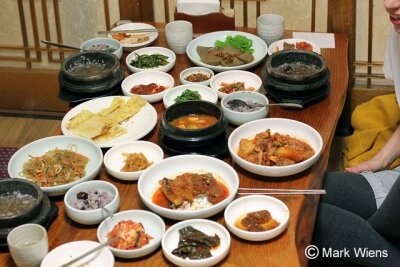 With every meal you eat in South Korea, you’ll not only get the main dish, but also a variety of small side dishes known as banchan. From a Korean self-barbecue feast to a simple hot rice/salad mixture of bibimbap, everywhere you eat, tasty side dishes will be provided.

There are countless different types of banchan prepared in South Korea, but the exact ingredients will depend on where you are in the country and what ingredients happen to be locally available at that particular time. Soy sauce-braised tofu, boiled bean sprouts in chili, miniature seafood pancakes, quail eggs, candied lotus root, sesame seed-seasoned greens, stir fried potato starch noodles, and of course, kimchi, are just a sampling of the never ending list of banchan possibilities. In fact, banchan are so delicious and offers such a well-rounded realm of flavors, that the side dishes alone could be considered an entire feast of its own!

Kimchi, one of Korea’s most beloved foods, is probably the most widely consumed banchan. Kimchi is a pickled and slightly fermented vegetable that can be made with napa cabbage, daikon radish, cucumber, bean sprouts, and a number of other vegetables (though it’s just a single vegetable in any given kimchi, not a mixture of vegetables). The main vegetable is then coated in layers of salt and dry chili flakes, and left to ferment until it turns slightly sour and crisp like a spicy pickle. If you had to choose a single side dish to go with your meat and rice, a form of kimchi would likely be the first choice.

Normally the more luxurious the meal or the fancier the restaurant, the higher quality and quantity of banchan you’ll be served. At a normal hole in the wall restaurant in Seoul I ordered a typical bowl of bibimbap and was served just napa cabbage kimchi and bean sprouts as my banchan. The next day I ordered a fish hot pot of seafood at the famous Noryangjin Fish Market which was delivered to my table along with numerous banchan that included not only a few variations of kimchi, but also an entire small fried fish (which could have easily been a separate order), and even a couple of fresh oysters on the half shell. Common banchan like kimchi can usually be refilled at Korean restaurants, but more luxury banchan dishes are usually just a single small serving.

The best way to experience an overwhelming amount of banchan is to go to a restaurant in South Korea and sit down for what’s known as a “set meal.” It basically means that without ordering anything specific, you’ll be served whatever is available that particular day, often the home cooked dishes that even the family of the restaurant will be eating. With the many main dishes that are included in a set meal, the amount of banchan that will be delivered to your table will be astonishing. Not a square centimeter of your table top will be visible, as it will be entirely covered in tiny bowls of banchan.

Korea has one of the world’s great social dining cultures, and part of the reason it’s so charming is due to its tradition of sharing banchan. Being able to taste a small quantity of a diverse amount of dishes and flavors along with your meal is a fantastic way to keep your taste buds hopping. Without banchan, a Korean meal just wouldn’t be a Korean meal.