Hotels of Note: The Oriental, Bangkok 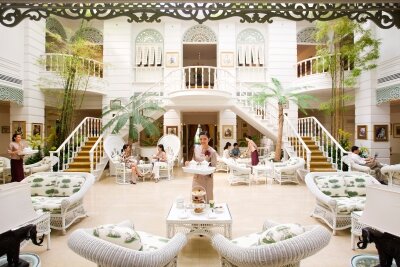 Bangkok is one of the biggest cities in Asia, and also one of the most chaotic. That of course is part of its charm, with modern malls and skyscrapers mingling with traditional wats (temples) and pedestrians milling past food stalls, motorbike taxis and vendors along the busy sidewalks.

Bangkok also happens to be home to one of the world’s great hotels, the Mandarin Oriental, a five-star legend which has been winning awards for years. With its location on the banks of the Chao Phraya River at the end of a quiet soi (street) and surrounded by lush tropical gardens, this hotel is a true oasis. It’s also the oldest hotel in Thailand, and features buildings ranging from its original colonial style 19th century property to the present day towers.

The Oriental Hotel, as it was then known, opened for business in 1876 after replacing the original hotel which burnt down in 1865. The hotel was established to serve the needs of western traders after Siam opened up to foreign markets, and in 1887 the hotel was transformed into a luxury hotel the likes of which had never been seen in Bangkok. The hotel even got the royal stamp of approval from King Chulalongkorn, who inspected it and declared it fit for visiting royalty.

The hotel saw many owners and improvements over the years but was run down and unkempt after heavy use during the Second World War. After the war the hotel was restored by a partnership that included Jim Thompson (a famous name around Bangkok, even today) and the property was once again the leading hotel in Thailand.

The first expansion of the hotel was the addition of the Garden Wing in 1958. This ten-storey addition featured the first elevator in Bangkok. In 1972 the River Wing was built on the land acquired next to the original property.

Of course like all the fancy hotels in the region, the Mandarin Oriental has seen its fair share of famous lodgers, which is a favorite of celebrity visitors to Bangkok. Somerset Maugham, Noël Coward, Barbara Cartland, Graham Greene, Tennessee Williams, and Joseph Conrad are some of the famous authors who have lodged at the Oriental over the years.

The hotel has even been seen fit for royalty, with visits from Diana, Princess of Wales and Prince Charles, and Queen Sofia of Spain. Royal guests go back as far as 1891, when Crown Prince Nicholas of Russia (before he was Tsar Nicholas) and his accompanying entourage made a visit.

As the hotel has had so many famous visitors, the suites are named after former guests and associates. Some of the suite names include Gore Vidal, Jim Thompson, Norman Mailer, and Joseph Conrad. In keeping with the hotels waterside trading heritage some of the suites are also named after trade ships from the hotels early days, such as Otago, which was at one point captained by Joseph Conrad.

Each of these suites are individually decorated, so each one has its own distinct character, even down to the decorative items and flower arrangements. In addition to individually styled suites, all of the rooms have an assigned personal butler (it’s not one of the best hotels in the world for nothing).

If you aren't staying at the hotel but would still like a taste of the high-life, a high tea (English afternoon tea) is served in the Authors' Lounge, which is in the original 19th century building.

If high tea isn't your thing then a drink on the riverside terrace will do the trick. With its back against the city and facing the mighty Chao Phraya River, this makes for a stylish place to watch the sunset.

While visitors to Bangkok have probably heard about the city’s traffic before they even arrive, being on the river gives the hotel access to water transport, and there is a shuttle boat to the nearby sky train, as well as a sightseeing boat that that take you to the Royal Palace and surrounding attractions.

It looks so beautiful, love those symmetrical stairs!
August 13, 2013 |