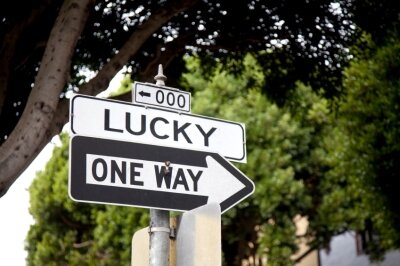 One interesting aspect of traveling is that there are so many facets of a new country or culture that you never really think about. The big things are easy to spot – language, dress, religion, government, currency – but there many little ones that go unnoticed. For instance, in English-speaking countries, a dog says woof woof! But in Thailand, a dog says hong hong! It’s the little things that are often the coolest.

Another cultural aspect with many differences is people’s perceptions of good and bad luck. Certain things, like black cats and lucky/unlucky numbers seem to be cross-cultural, but there are plenty of other elements that are unique to a certain culture or country.

For instance, the color red has special significance in a variety of countries. In Korea it’s believed to be extremely bad luck to write your name in red ink – some say you can even die! However, in Israel, if you wear a red string around your wrist it’s supposed to scare evil away. In Taiwan and Poland, wearing red underwear is supposed to bring you good luck on gambling and exams, respectively. And speaking of exams – if you want to pass them in Korea, don’t eat seaweed soup on that day, and if you’re in Vietnam, don’t eat eggs, as they represent 0, which is a score you definitely want to avoid.

If you get hungry when you’re traveling, be sure to mind the local customs when it comes to food. In China, parents tell their children that unless they eat all the rice in their bowl, their future partner will have a bumpy face, and in Thailand they say that whoever eats the last bit of food on a place will have a beautiful boyfriend or girlfriend. In Romania, food left on a plate will ensure a woman an ugly husband, and if you’re sitting at the corner of a table, you will be single forever! When in Israel, don’t pass a knife to someone else directly or it will cut your friendship apart – put it down and let the other person pick it up. And if you’re in Vietnam on New Year’s Day of the lunar calendar, don’t eat duck, squid or dog. Easy!

And if you plan on getting married overseas, there are good luck/bad luck rules to consider as well. In western cultures to ensure good luck the bride is supposed to carry four things with her: something old, something new, something borrowed and something blue. On top of that, it’s very bad luck for the groom to see the bride before the wedding. And in some countries in Europe – Spain and Bulgaria, for instance – never sweep or clean around a person’s feet or they’ll be single forever!

Numbers also play a big role in superstition, especially in Asia. It’s well-known that Chinese avoid the number 4 if possible – on street numbers, apartment addresses and phone numbers, because the word “four” in Chinese sounds a lot like the word for “death”. It’s the opposite case for “eight” which sounds like “wealthy”. If your phone number was 888-8888 you’d be very lucky indeed!

In Vietnam, you should avoid taking pictures of three people, because the one in the middle might die, and in many western cultures you should avoid the number 13. The ultimate bad luck day, of course, is Friday the 13th.

A final random list, just we cover all the bases:

- In Korea, there are plenty of superstitions about sleep. If you dream of a dog you’ll have a bad day, but dreaming of a pig means your day will be lucky. And when you go to sleep, don’t have an extra pillow on your bed, otherwise a ghost might decide to lay down beside you!

- In China, don’t wash your hair for the first few days of the New Year, lest your luck gets washed away as well.

- In Vietnam and Thailand, don’t say a baby is cute or pretty or handsome – doing that will result in the opposite thing happening.

- In Spain, it’s bad luck to open an umbrella indoors, and to spill salt on a table. But it’s good luck to rub your lottery ticket on the belly of a pregnant woman – just make sure you know her first!

- In western culture you will have bad luck if you: walk under a ladder, break a mirror, have a black cat walk in front of you, or talk about a future outcome that is negative.

- In France you will have bad luck if you: wear new clothes on Friday, give carnations or chrysanthemums as a gift, or put your hat on a bed.

- In Russia, if you forgot something at home and return to get it, you should look in the mirror to avoid bad luck. You also shouldn’t kiss or greet someone in a doorway, take out the trash after sunset, or eat food from a knife.

- And finally, in Arab cultures, if your right hand itches, you will soon get to see someone that you haven’t seen in a long time. Good news!

It’s pretty difficult to remember these all, but don’t worry – if you happen to forget on your travels, we’re sure that one of the locals will quickly remind you.