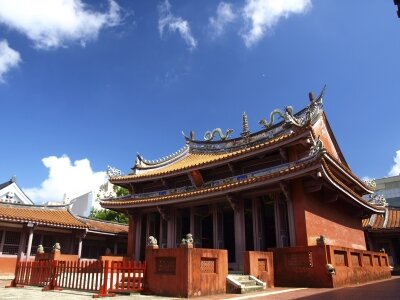 For Taiwan’s oldest and fifth-largest city, Tainan can be deceiving. One may expect skyscrapers and crowds of millions pushing through wide streets, but you may be surprised to find a more serene environment with a small town vibe. It’s known far and wide as a place where you can find “real” Taiwanese cuisine, as well as for its gorgeous temples, friendly people and charming neighborhoods linked by narrow, winding alleys and roads. It’s definitely a must-see city!

There is evidence of habitation going back at least 20,000 years but the area around what is now Tainan really came into its own in the 1500’s, when Chinese and Japanese sailors set up thriving trading posts. This led to a healthy blending of linguistic, cultural, and ceremonial traditions, and the city today still shows clear signs of these influences. Of course, the island wasn’t immune to the surge of European exploration in the mid-1600’s especially the Dutch, who set up a fort on the island and dominated the area for 40 years until they were forced out by the Chinese.

Today Tainan is considered one of Taiwan’s Culture Capitals due to its long history of trade and exposure to a wide variety of cultures and traditions. At the forefront of these trends is Tainanese food, which is sought out by hungry visitors who come from all over Taiwan for authentic eats. Of course, the variety of seafood is mind-blowing, and favorite dishes include oyster omelets, fish noodles, shrimp rolls and milkfish, which the Taiwanese call Koxinga’s Fish (國姓魚), after the leader responsible for pushing the Dutch out. There are also plenty of night markets where endless rows of tables serve up all types of snacks, from stuffed “coffin toast” to fried rice cakes to delicious ba-wan dumplings smothered in sweet sauce.

Perhaps Tainan’s most famous attribute is the large number of temples, shrines and churches, some of them among the island’s oldest. Each of them, large or small, have been lovingly maintained by masters of craft, while temple decorations are made with old methods and traditions passed down from generations past. One of the most-visited is the Confucian Temple, which dates to 1665 and is noted for its lovely gardens and massive banyan tree. Another great temple to visit is the opulent Tainan Grand Matsu Temple (大天后宮), which honors Matsu (媽祖), goddess of the sea and has a fairly storied history: it was built by Koxinga’s son as a residence for a visiting Ming Dynasty prince, who committed suicide in the building – along with five of his concubines – before it was turned into a shrine. Also don’t miss the ruins of Anping Fort (安平古堡), which is where the Dutch first set up shop and where Koxinga lived once he was in control. Chihkan Tower is another Dutch-era building worth a visit.

And of course we can’t talk about Tainan without mentioning the plentiful shophouses and old buildings that are linked by winding roads and beautiful pathways that are perfect for navigating on foot. Dozens of structures have been transformed from old musty homes into hip art galleries, cool cafes and charming restaurants. There are also plenty of traditional tea shops that do things the old way – indeed, the popular pearl milk tea beverage is originally from Tainan. There are also many night markets, such as the Huayuan Yeshi (花園夜市Garden Night Market) where you can stroll for hours browsing everything from designer clothes to handmade jewelry.

If one is looking for a peek into Taiwan’s history and culture, Tainan is a perfect destination to get a huge dose of authenticity amid beautiful surroundings.

Tajamal
Taiwan looks really fascinating and this is a great roundup for newbies, thank you!
September 12, 2013 |

Patent Attorney
Have been to Tainan 2 years ago as part of my pre wedding holiday. Had a short stop over and managed to visit just the night market. The town itself is a very nice and relaxing place to stay, as compared to the more crowded taipei city:)