The Kathmandu Valley: Three Cities in One 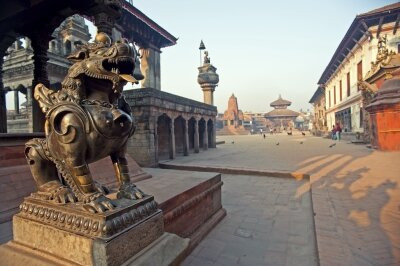 Few cities on earth are as accessible or unique as Kathmandu, Nepal and its greater valley area. Steeped in history, the region’s dizzying array of religions, a traditional yet friendly culture, an incredible assortment of food, and stunning attractions come together to make this a supreme destination for travelers. The best part – it’s reachable from most countries in south and southeast Asia in just a few hours. This area really is one valley with three distinct cities – Kathmandu, Patan and Bhaktapur.

Modern Nepal was formed in 1768 by Prithvi Narayan Shah who united a wide range of people across varied and unforgiving terrain to form what is now more less modern day Nepal. Prior to this the Kathmandu Valley had three city-states: Kathmandu, Patan and Bhaktapur. Each had their own sitting kings and elaborate Durbars (Royal palaces), which today are UNESCO World Heritage Sites and serve as the centerpieces to each city. Not only do these Durbars rank as must-see attractions, but the cities and their residents are each unique, holding stories and allure around every corner.

Kathmandu has for centuries been a main trading point between India and Tibet, with people converging to trade their wares, meet friends, rest, eat and generally mix and mingle. As a result it’s always been an open and tolerant area with a vibrant mix of people and food. Over the centuries many people have moved here and the structure of traditional societies has eroded. Its old buildings have as well, and are slowly but surely being replaced with new ones, a sign that locals don’t value these items as much as westerners might and are looking for progress. People from all over Nepal come to live in the modern day capital, with longer-term residents moving a bit further afield to municipalities like Swayabunath, famous for the ‘Monkey Temple’ as it’s known to most visitors, and renting out their houses in Kathmandu proper.

Patan is the city of artisans, and as such is rich in heritage preservation and traditional goods, not only because foreign aid dollars have been thrown at it, but also because locals see the value in keeping traditional skills alive and preserving the old ways. Items found here are not only beautiful but are often used for cultural or religious purposes and, of course, as a source of income too. The city is a nice mix of old and new and they’ve not gone overboard with tearing down old structures in favor of new ones. A good balance has been struck, with many residents renovating and upgrading existing structures, showcasing their beauty for feature generations.

Bhaktapur has always had a slower heartbeat and is the city of farmers. Its residents have never had the same financial means as those in the other cities; it’s not been as open to foreigners and has remained a rather closed society over the centuries. As modern methods of finance and whiz-bang technology haven’t made too many inroads here, the locals still live very much the way they did hundreds if not thousands of years ago. Non-governmental-organizations have seized this city-stuck-in-time over the last couple of decades and have been restoring its structures, helping to maintain it as a sort of living museum. It remains very conservative and its UNESCO World Heritage Status means that its current layout and infrastructure can’t change very much, ensuring it will likely remain a celebration of a time gone by for a long time yet.

Exploring these three cities will give you some amazing insights into the Kathmandu valley, its culture and its people, and is highly recommended.