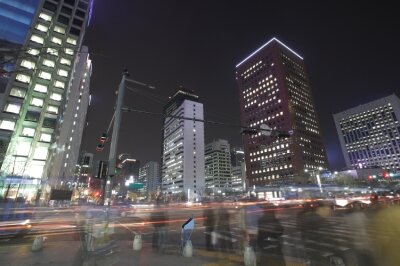 If a think-tank full of the world’s top city planners and developers put their heads together to design a state-of-the-art public transport system, it would probably end up looking a lot like Seoul’s. To be fair, that’s not far from what actually happened. The Seoul of post-war Korea expanded rapidly as people from the surrounding countryside poured in. Those people needed practical and effective infrastructure, and transit solutions that worked. And that’s exactly what they got.

That’s good news for today’s visitors. For all of Seoul’s drab (some would say ‘soulless’) architecture, the city redeems itself with one of the cleanest, most beautifully organized public transport systems in the world. All a visitor needs is a public transit map, a card with the name and address of their Seoul hotel written in Korean and a stored value card (try the Seoul City Pass or T-Money card) and you can get pretty much anywhere you need to go. You’ll end up doing a little bit of walking between stations and your onward destination, but this is nominal. Wherever you are headed, the subway, taxis and buses of Seoul will get you there quickly.

Here’s a quick breakdown of the Seoul public transit system:

Subway: The world’s second-busiest subway system in the world after Tokyo, it handles more than 2.5 billion riders per year. That’s the equivalent one-third of the global population filing through the Seoul’s subway stations in a given year. (Read: it gets really crowded during rush hour.) During peak travel times, you’ll feel the squeeze, and people can be a little bit pushy.

And if you want to call that a downside, rest assured that it’s the only one. Seoul’s subway is clean, cheap, fast and efficient. It’s a testament to what the human race can accomplish when we put our differences aside and focus instead on highly practical solutions.

The subway comprises 17 lines, but the nine numbered ones are most important for tourists and visitors. Fares are minimal, and it’s safe to say that you can connect between most places for a few US dollars, tops. Trains whistle along between stations and take, on average, a little over two minutes to arrive. There are multi-lingual mobile apps and even heated seats for the winter! It really is a beautiful system, and you’ll be hard-pressed to find an expat in Seoul who doesn’t regularly sing its praises.

Taxis: Get this: taxis can actually be a good value in Seoul. It’s rare that you can say that for a city of this size, but Seoul is one of those life-affirming exceptions. Single passengers won’t save money in a taxi, but small groups covering short distance certainly can. It can even work out to be cheaper than the subway. Taxi sharing is a phenomenon in Seoul – so much so, in fact, that it’s technically illegal between strangers. I guess it’s a different story if you get acquainted curbside and then decide to share.

You can flag a taxi down just about anywhere in the city. They’re all metered, and fares are clearly indicated. Regular taxis (ilban) are usually blue, white or sometimes silver, with an illuminated ‘Taxi’ sign on the roof. Deluxe taxis (mobeom) are black with a yellow stripe. You pay for that yellow stripe – twice as much, to be precise. You also get a driver who’s much more likely to speak English, so it could be worth it.

Buses: If you really hate walking – as in, can’t bear to walk three blocks to and from the nearest subway station – then Seoul’s bus network is a godsend. A tangled web of 400 different bus routes connect the city, and it’s safe to say that if you’re going somewhere in Seoul, there’s a bus route or two that can drop you at the door.

All but the most militant non-walkers in Seoul will find the buses more hassle than they’re worth. The routes are confusing (compared to the subway, anyway) and English language won’t get you very far. You’ll find some English signposting, but not enough to really get by.

Learning the ropes for all of these systems isn’t hard, and with a bit of riding practice will soon find yourself arriving at appointments right on time, no matter where in the city they are.