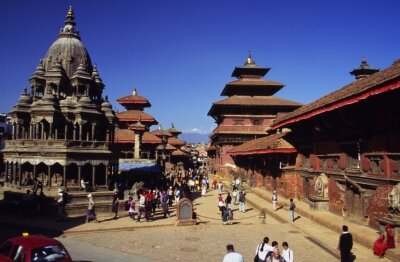 Most travelers want to connect personally and deeply with the destination they’re visiting in Asia. The term street-level is often used to describe such experiences and there’s truly no better way to explore new areas than by foot. Sure air-conditioned taxis are comfortable and rickshaws novel at times, but striking out by foot is truly the best way to see a city. Indeed, when you visit an older and not centrally planned city like Kathmandu, taking a hike becomes even more appealing, practical and fun.

Nepal’s capital Kathmandu is a treasure trove waiting to be discovered, but navigating its labyrinthine streets and passageways efficiently and not sitting in traffic is the key to having the best possible time. With roughly 2.5 million people calling the greater Kathmandu Valley home, this is a sprawling, yet accessible metropolis. People have been living here for about 2,000 years, and it’s been a well-established trader’s meeting point for centuries. Indians from the lower subcontinent didn’t want to go higher than the city’s 1,400m elevation and traders from the Tibetan Plateau found any lower point too hot, so this is where they met. Areas grew into towns, towns into cities and along the way they all became connected by a series of roads, paths, and passageways, making foot the best way to commute. After all, cars didn’t even come to Nepal until the late 1940s when the first one was literally carried in over the mountains.

Whether you’re exploring Kathmandu proper or the ancient cities of Patan and Bhaktapur, walking is the best (and certainly most interesting) way to get around. Streets are narrow, bumpy, turn into alleys, and are becoming more traffic-choked by the month, making foot-power often faster and a ton of fun. Pick a starting point on your map (make sure you have one) and hop a taxi to that spot. Pick a finishing point, point your nose in that direction, and head off, picking small streets and alleys as you go. Locals are extremely friendly and very happy to point you in the direction of the next passageway that continues further. If you get lost, ask where the Durbar Square (Royal Square) is – each city has one in its center, and it’s easy to use it to reorient yourself.

As with many Asian cities Kathmandu has streets that specialize in specific items. You’ll hit the fabric district, turn the corner and encounter brass vendors, then around another corner you’ll see dentist shops. There’s a fascinating surprise around every bend. While modern shops are becoming more common, districts like Kathmandu’s Ason are firmly rooted in the past, with a mesmerizing medieval aura to them. Here small lanes teem with activity, narrow wooden buildings teeter upwards, faces are varied and exotic smells dazzle the senses. This is what traveling’s all about.

Striking-out on foot puts you literally at ground level, enabling you to stop when you want, share pleasantries with locals along the way, go here, go there, take wrong turns, and best of all, when you’re tired, lost, or have just had enough, jump in a taxi and head back to where you started or want to be next. Remember to keep a business card from your hotel with you so you can show it to a driver and get back home. Have fun exploring these three fascinating capitals and their contrasting vibes and residents!

ajeetsingh
Nepal is one of the best destination around the world for Adventure Activities.
July 12, 2013 |