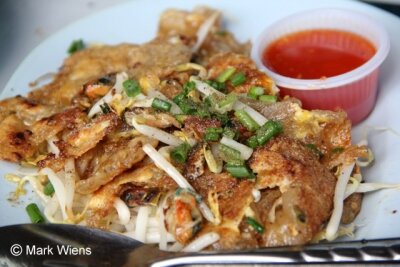 From fish to crustaceans, many forms and varieties of seafood play a major role in Thai cuisine. Deep fried, steamed, curried, and roasted are just a few ways that seafood is prepared, and there is no end to the ways in which seafood can be combined with the spicy, tangy, sour and sweet flavors in traditional Thai cooking. For seafood lovers, Thailand is a paradise!

Though it’s now mostly farmed, a barramundi fish (also known as an Asian seabass), is a favorite in Thailand. While it can be cooked in a number of different ways, steamed in a tangy lime and garlic sauce is one of the signature Thai methods. After the entire fish is steamed it’s normally served on a metal fish shaped saucer, submerged in a zesty soup consisting of lime juice, garlic, and chilies, and then placed over a candle to keep it continually piping hot while you pick its bones clean.

At a mid- to upper-class dining restaurant in Thailand, boo pad pong garee, or crab yellow curry, is always a crowd-pleaser. The curry powder used is similar to an Indian mixture, including turmeric, cumin, coriander and fennel. The crab is fried in oil in a wok along with both white and green onions until fully cooked. It’s then combined with the yellow curry powder and finally thickened and enriched with beaten eggs. The dish is not chili hot, but the egg curdled sauce coats each piece of crab in flavorful spices.

One of the most popular seafood dishes at Thai-Chinese restaurants and curry stalls around the country is hoy lai pad prik pao, or clams stir fried in roasted chili sauce. The clams are wok-fried, combined with fragrant roasted chili sauce, a dash of condensed milk to make things creamy, and just before turning off the heat, a heap of fresh Thai sweet basil is added. The little clams are packed with flavor and don’t taste fishy – rather, they’re fragrant from the chili sauce and with a boost of earthy sweet basil.

Hoy tod, a greasy mussel omelet, is high in demand on the streets of Thailand. Depending on the style, some vendors sell their version more like a real omelet with an emphasis on the eggs, while others use less eggs and focus on rice flour to create a sticky dough that encases the mussels. Either way, the mussel mixture is fried in a pool of oil until becoming crispy on all edges. It’s served over a bed of bean sprouts and often enjoyed with a sauce resembling weak ketchup).

Another seafood dish that commands the streets of Thailand is hoy kraeng, also known as blood cockles. I’ll be honest, these things look awful and are usually not the preferred seafood option for foreign tourists, but many local Thais crave and cherish them. As soon as you pop open a shell, a murky red and brown liquid oozes out, hence the blood cockle name. Most of the time they are boiled plain and served with a dipping sauce made from garlic, chili and lime.

From high-end Thai restaurants to street-side food stalls, while dining in Thailand, you’re never far from seafood that’s waiting to be discovered!

Hi Mark, thanks for sharing. We have been to Bangkok once and visited one of the chinese seafood restaurant around Chinatown, the fried crabs is perfect, we love the taste pretty much. Although we are also Chinese, but we cant find a similar one in our country:)