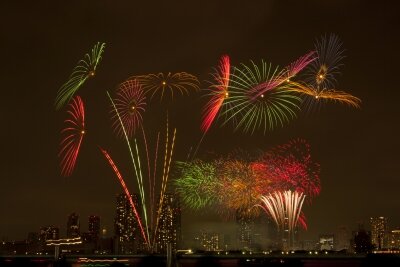 What do you get if you cross a culture of excellence, lovely summer weather, and thousands of pounds of high-explosive gunpowder? No, not a Michael Bay movie marathon at your local drive-in theater; rather, you get Japan’s noisy, colorful, crazy-fun fireworks festivals.

As most people know, fireworks originated in Asia, and centuries before they were used as decorative and loud entertainment, they were used to scare away spirits and demons, and even as weapons. In Japan, the word for fireworks is hanabi and the country is known for its many summer festivals and celebrations across the country for which fireworks shows are a major component, and are definitely worth checking out if you’re in-country.

Most of the fireworks festivals come with lively street markets, plenty of food, musical performances and games for families, couples, and people just looking for a bit of fun. During the day, you can wander the streets eating and enjoying the decorations, shopping, or visiting the historical and tourist sites in the town that you’re in – it doesn’t matter where, every place in Japan has something cool to see.

But the festivals and fireworks are not simply a few guys lighting fuses and running away. Like many things in Japan, the event is taken to a high level of perfection, and the fireworks portion of the festival isn’t just a show, it’s a high-profile competition. Fireworks companies work for months putting together an amazing display of pyrotechnics, with custom-built shells, computer-controlled timing, and intricate choreography that result in a stunning display of light, sound and color.

There are a few things you should know before heading to see one of these festivals. First, they are often very crowded, and people show up hours beforehand to stake out their seat. Also, as the shows are at night, it’s probably best to have a hotel room ready, as transport back to your home base will often be either hard to find or packed full. Of course, this means that you should book a room well in advance. And of course, bring a blanket to sit on, some money for food and definitely don’t forget your camera.

Here is a list of some of the more notable hanabi festivals in Japan.