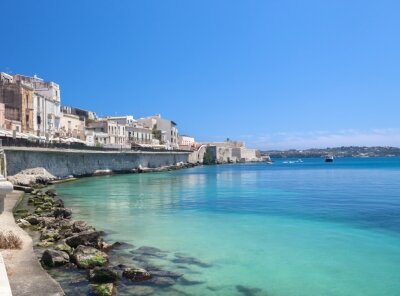 It sounds horribly like a travel writer’s overused cliché, but the beautiful Sicilian city of Syracuse really and truly does have it all.

And what exactly is “it”, you may well ask. Let’s just say that Syracuse has historical monuments galore, a busy, picturesque harbor, narrow winding cobblestone streets, amazing churches and cathedrals, great food, brilliant markets – pretty much everything one needs for a perfect holiday. Oh, and the shopping is elegant, too. This is Italy, never forget.

Let’s start with the city’s history, of which there is far too much to cover in a simple blog post. The Greeks first visited in the 8th century BC, settling on the island of Ortygia, which is now connected to the rest of the city by three small bridges. The famous Roman philosopher and statesman Cicero once described the city as “the greatest Greek city and most beautiful of all,” and wandering through the spectacular Greek theatre – the famed teatro Greco – you tend to agree with him. Far from Greece, in a little corner of an Italian island, overlooking the sea, the theater is a jewel. It’s in amazingly good, unrestored condition, and if you visit off-season you’ll likely find it almost empty. You can wander at will or simply sit and let centuries of history wash over you.

After the Greeks came the Romans, who also left their indelible print on the city. The ruins of the Roman Amphitheater tell a bloody story, for gladiators would fight to the death against wild animals here. There is a water tank next to the amphitheater, which was used for cleaning up after gladiatorial battles, and a rectangular hole in the middle, remnants of an elevator which was used to raise animals to the scene of battle.

After you’ve visited these monuments, head to the excellent museum, which is crammed with thousands of artifacts from the sites – an absolute must. There is just so much history to be absorbed, and seeing the jars and statues and frescoes adds a healthy dose of substance to the ruins, scraped bare by millennia of weather and neglect.

Fast forward a few generations to the 18th century when the city’s Duomo, or Cathedral, was constructed in heavy, ornate Baroque style. It was built on top of a ruined 7th century AD cathedral which was in turn built on top of the 5th century BC Temple of Athena. It’s hard to keep track of but it’s clear why Syracuse sometimes seems like one vast open-air museum.

The Piazza del Duomo is one of the focal points of Ortygia. Not content with the fabulously ornate cathedral just a few meters away, there is also the equally ornate Church of Santa Lucia, the city’s patron saint. The piazza is lined with cafes and restaurants, and everyone sits outside sipping coffee, watching people and discussing current events in loquacious, animated Italian. The residents walk their dogs, children play, vendors wander round selling balloons and postcards and guide books, and the waiters speak every language imaginable, so do not hesitate to sit down and order lunch al fresco.

Better food is to be found in any one of the tiny, anonymous trattorias (informal restaurants) that line the narrow lanes of old Ortygia. Your best bet is to look for a restaurant full of Italians, ask what they’re eating, and order that. This is a city that loves its food, and with the delicious seafood, excellent lamb and fresh vegetables from the surrounding countryside – all washed down with a local Sicilian wine, naturally – it doesn’t get much better.

The markets are a crowded, noisy, visual treat, and from experience, you can happily nibble your way through them, tasting free samples of the locally grown capers, olives and the slightly nutty tasting local Parmesan cheese. The harbor is always busy, and since it is primarily a working harbor, there are fishermen repairing their nets and offloading the day’s catch, with seagulls wheeling and crying overhead.

Ortygia should ideally be visited on foot, since the streets are dauntingly narrow for anyone other than a local. Park your car along the seawall and then take any cobbled street leading inland and explore. Churches, tiny piazzas and fountains hide around every corner; simply put, Ortygia is a visual treat and a delight to walk through.

You could, of course, lounge around and relax and do absolutely nothing in Syracuse, but this is such a gorgeous city, and so ridiculously crammed with history and art, that it is crying out to be explored.

With a judicious mix of sightseeing and eating, and then some more wandering followed by a little more eating, you can make sure a trip to Syracuse is a perfectly balanced visit that touches all the bases.