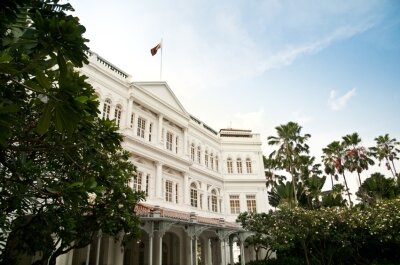 Out of all the colonial-era hotels in Asia, one of the most well-known is the Raffles Hotel in Singapore. The “grand lady of the Far East” is famous around the world for being a luxury hotel that has retained much of its heritage from a bygone era. Its international fame is also helped by the fact that it was the birthplace of a famous cocktail (more on that later).

The hotel was originally located on the seaside but the little island city has been gradually reclaiming land over the decades, and the property today is located in the middle of town and not on the waterfront. The original 10-room hotel was expanded 12 years after it opened with the construction of the neo-Renaissance building that stands today.

So why was the hotel named Raffles and not Sarkies? Well, Sir Thomas Stamford Raffles was a British statesman who founded Singapore in 1819. He was also a prominent figure in the British Empire in Southeast Asia who did more than just start cities. He began his international career working for the British East India Company in Penang in 1805, then later moved on to Malacca. He also played a prominent role in the conquest of Java from Dutch and French military forces which helped the expansion of the British Empire, wrote a book on the History of Java, and led an expedition that rediscovered and restored the 9th century temple complex of Borobudur. Oh, he was also an avid biologist and has the largest flowering plant in the world named after him (the Rafflesia, which is also called the Corpse Flower due to its rank smell). So you could say he earned having a fancy hotel named after him.

Just as famous as the hotel is the drink that was born there. The Singapore Sling was concocted around the turn of the 20th century by a bartender, Ngiam Tong Boon, working at the Long Bar. The drink consists of gin, cherry brandy and orange, pineapple and lime juice as the main ingredients. The drink has become so iconic that “having a Singapore Sling at the Raffles Hotel” shows up on many tourist’s “to do” lists.

The Tiger Under the Billiard Table

Another local legend says that the last wild tiger in Singapore was shot under the billiard table in the Bar & Billiard Room. This was in 1902, of course, a time when shooting the last of something was a big deal. Whether it was a wild tiger or an escaped zoo animal, it is unclear.

As you would expect the Raffles has seen its share of famous guests. Rudyard Kipling stayed there, as did Joseph Conrad, Ernest Hemingway, Somerset Maugham, Ava Gardner, Charlie Chaplin, and Noël Coward.

As is the case with these classic hotels, after 100 years of use the Raffles was in need of a makeover, so in 1989 it was refurbished with modern amenities while at the same time great effort was expended to maintain its grand style. Liveried Sikh doormen still greet guests, who can also visit the Raffles Hotel Museum which contains a comprehensive history of the hotel.