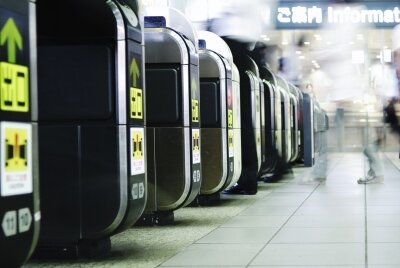 The good news is that Tokyo has one of the best public transit systems on the planet – truly a gargantuan, mind-blowing monument to human ingenuity and planning. Think about what it takes to provide punctual rail transit to a city of 13 million people spread out across 2,200 sq.km; Tokyo nailed it. The bad news is that it’s the granddaddy of confusing transit systems. The first time you get lost (and this will happen), take solace in the fact that you’re not alone – the same thing even happens to lifelong residents from time to time. But with armed with a good subway map, a transit pass and an independent traveler’s sense of adventure, you’ll be getting around handily in no time.

If you plan on using public transport more than two or three times, consider purchasing a pass or stored-value card. The JR IO card is issued in denominations of ¥1,000 (USD$10), ¥3,000 ($30) and ¥5,000 ($50) and saves you the hassle of purchasing a ticket every time you board the subway. If you plan on doing a lot of commuting in a single day, the Tokyo Combination Ticket is accepted on all major lines – JR, subway and bus – and is valid for 24 hours.

When it comes to getting around Japan, the most important thing to remember is that it’s probably going to take longer than you expect. The system is efficient, and the transit times listed at stations are accurate nearly to the second, but tourists and newcomers often underestimate the time they’ll spend boarding, disembarking, changing trains and otherwise walking from the station to their destination. With that in mind, err on the slow side when issuing ETAs.

The Tokyo Metro: The metro is the neural network of Tokyo. Clean, efficient, user-friendly and intensely crowded during morning and evening rush hours (want to retrieve something from your pocket during the ride? Good luck with that). The metro employs attendants whose job is literally to push passengers into the train so that they don’t get caught in the doors. These attendants were introduced years back at Shinjuku station, at which point they were tactfully referred to as ‘passenger arrangement staff’. Today they’re known as oshiya, which translates more or less as ‘one whose line of work is pushing’. Pushers, in so many words.

This well-organized leviathan can deliver you within walking distance of virtually any place you’d care to visit in the city. Nine of the thirteen lines are operated by Tokyo Metro, and the remaining four by Toei. These two companies work in relative harmony, with efficient interchanges and connections. However, they do operate separate ticketing systems. In either case, tickets are sold from vending machines with the subway routes posted above them. The fares to specific stations along the line are indicated on this map, though they’re sometimes only given in Japanese. If you’re not sure how much you should pay to get to your destination, just punch the button for lowest fare. When you exit and surrender your ticket, you can pay the balance if there is one.

Lines are color-coded and each has a letter, and the signage tells you how many minutes it will take to reach each ongoing destination. A diagram posted at the station will even show you which end of the train – or even which compartment – you should use for a particular connection.

Commuter trains: Tokyo’s subway network is complemented by electric trains operated by the East Japan Railway Company (known as ‘JR’). Trains are color-coded and run aboveground, with tickets sold from vending machines as on the subway.

- The main rail line is the JR Yamanote Line, which appears green on maps and runs a 35-km circuit around the city. Most of the commuter trains in the city have a terminus on the Yamanote loop. It connects to all the major centers in Tokyo in the space of about an hour.

- The Sobu and Chuo lines are also important. These trunk lines bisect the Yamanote loop in an east-west direction, starting from Shinjuku station in the west and running side-by-side for a while. Along the way, the Chuo Line (orange) splits off and heads for Tokyo station, while the Chuo line continues on to the residential suburbs in the east.

Buses: In a city with such a comprehensive and efficient rail and subway network, it’s hard to justify using the buses. A signboard at the front of the bus will indicate the next stop – in English, more often than not. That said, figuring out the bus routes is challenging and signage at the stops is usually exclusively in Japanese. If you’re certain that a particular bus will get you where you are going, then this can be a handy way to cover short distances.

- Tourists can make use of the Tokyo Shitamachi Bus, which follows a fixed sightseeing route around Tokyo. It departs from Tokyo station (Marunaouchi north exit) every 30 minutes and makes seven tourist-friendly stops along the way.

Taxi: If you’re trying to see Tokyo on a budget, put taxis out of your mind altogether. Base fares are high, and they increase by absurd increments. You also pay dearly for the time your driver spends gridlocked in traffic. Fares are published in the cab on the back of the front passenger seat. A red light in the corner of the windshield indicates a taxi that’s ready to take on a passenger.

And the cab doors! It shouldn’t be a surprise that the taxi doors open and close automatically in a tech-obsessed city like Tokyo. But no, your driver will not be an android, probably won’t speak English and definitely will be irritated if you try to open and close the door by yourself. Your job is just to sit there like a good customer and pay the fare at journey’s end – which you can do by credit card for amounts over ¥5,000 ($50).

From the Airport: Two major lines connect from Narita Airport to Tokyo city proper – one operated by Japan Railways and another on the privately run Keisei Line. Both have options that take just under an hour, and the Keisei line has an additional non-express option that takes a bit longer. JR also operates a monorail line from Haneda Airport that terminates at the Hamamatsucho station on the Yamanote loop.

Definitely agree - the Japanese know how to do their public transport well. They have to - trying to move millions of people around in a small space creates challenges, but I think they have the best and most efficient public transport system in the world!
April 20, 2013 |

Anthony
thats always on thing about traveling to another place is the transport system and learning how to use. just learning the london the undergrund was bad enough so its great you have provided some info on the Tokyo transport system,
April 22, 2013 |