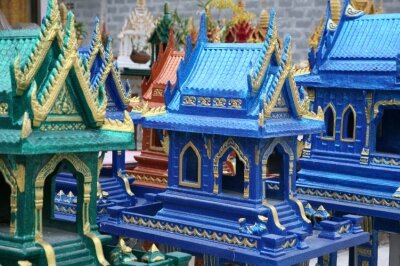 Walk down almost any Thai street big or small, and eventually you’ll see it – a small little house, usually made of wood but sometimes stone or plastic or glass. More often than not, they’re tucked away in a quiet corner, sitting on top of a pillar a few feet off the ground. To untrained western eyes it seems like a doll’s house, or maybe a model to be used in a movie. In fact, most new arrivals to Thailand utter the question sooner or later – “What are those little houses for?”

Those little houses are one of the most visible and enduring parts of Thai culture. The basics are this: many ancient beliefs are still observed in modern-day Thailand, and that includes the belief in spirits, which inhabit the land, the trees, the mountains and the buildings that we humans make our homes in. In order to ensure prosperity and peace from unhappy spirits, we must make offerings to appease them, and that includes giving them a place to live and a visible token of our respect. Hence, the spirit house, or saan phra phum in Thai.

You might also notice that spirit houses are rarely standing empty – usually they have fruit, statues of animals or humans, bottles of soda or water, flowers, or incense sticks or candles surrounding them. This, you see, is how you appease certain spirits. There is far too much nuance to go into in a single blog post, but everything you see on a spirit house has special significance and many rules to adhere to. For instance, if you offer soda, it should be red or green or another bright color – never black like cola. And if you offer an animal statue, a zebra is always a good choice, as they represent the zebra crossing for pedestrian safety. (Or so one story goes; it’s hard to pin this one down but given the number of zebra statues at shrines near major roads, it’s easy to believe).

One element of spirit houses that is often overlooked is that there are often (but not always) two of them – one tall one and one short one. Usually, the tall one will be on a single pillar, while the short one will be on four, like table legs. The lower one usually represents the spirit(s) of the place where it was built – a house, office building, park, or convenience store. The taller on often represents the spirit(s) of the land, such as those that inhabit mountains, tress or water. Different offerings are made for different purposes – for instance, one may leave fruit for the spirit of the land and ask for permission to clear some space for a farm. Or if a couple is newly married and are moving in together, they might make a tandem offering to the spirit of their new house and ask for protection or good fortune.

There are also many sizes and styles. Perhaps a simple wooden house for a small mom & pop convenience store will be fine, while, say, the headquarters for a large bank might have a huge spirit house custom built out of stone and glass. The only limit is how much money one wants to spend, and how ornate an offering one thinks is appropriate.

One last thing – if you happen to be walking behind a Thai person on the street and they slow down and wai (offer a quick prayer), don’t be alarmed – they’ve likely just passed a spirit house and are showing their reverence. The spirits are everywhere, you see, and we like to keep them happy.

they are such colourful and beautiful to look at, its a shame if any one over looks them while traveling in the area
April 22, 2013 |

martin
Thailand is famous for its home involving spirits, so this is probably one of the intended home.
April 25, 2013 |

takai
In Phuket its a little more over looked because visitors are looking at everything else. It's the actual Thai people that do the prayers but it's lost from sight even if it's in plain view for all to see.
May 9, 2013 |