« Hotels of Note: Penang’s Eastern & Oriental | Main | Hong Kong from below and above »
Wednesday 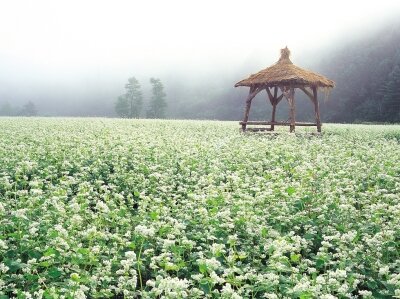 Asia is truly is a region that has it all, offering almost any type of adventure that a traveler can imagine. But in between stints doing the most popular activities and visiting the most popular locations, plenty of people are finding new and more meaningful ways to connect with Asian people, culture, and history.

Of course there are plenty of great things to be said about spending time in Bangkok or Tokyo or Phuket or Phnom Penh and the experiences there are no less real or authentic than any other that the average traveler will have. But what happens when you put a bit of effort into going off the beaten path, to digging a bit deeper into the culture of your temporary home?

One group of people recently did just this in South Korea, and it was a fascinating window into how travel can connect you to an unfamiliar culture. A group of five travelers – Tony MacGregor, Christopher McCarthy, David Watermeyer,Sangmin Sunim and Rhea Metituk – undertook a pilgrimage to follow in the footsteps of the famous 7th century Korean monk Wonhyo, a 500 km trek that took them from the eastern city of Gyeongju to the famous Wonhyo cave, approximately 100km from Seoul, via some of the most rugged and densely forested areas on the Korean peninsula.

Wonhyo himself is a revered figure in Korean culture. He lived from 617-686 and was known for his unconventional method of teaching and his habit of traveling far and wide. He called himself Muoae Geusa (unhindered practitioner) and could often be seen using a gourd as a drum, dancing and singing in the street and asking people to join in. One of the most famous Wonhyo stories recounts how he took shelter in a dark cave during a rainstorm. Waking up thirsty in the middle of the night, he grabbed a container and drank the cool refreshing liquid inside. Upon waking the next morning, he discovered the cave was actually a tomb, and the container was a human skull filled with musty water. It suddenly occurred to him the power the mind plays in ones’ perception of reality, and this – as the legend goes – was when he achieved enlightenment.

Trips like this offer travelers a rare glimpse not only into the physical character of a country, but also give a great deal of insight into why this culture is the way it is, allowing connections to people on an unusually natural level.

During their trip in Korea, the Wonhyo pilgrims were able to form quick bonds with locals they met along their travels, all of whom knew the stories of the revered holy man very well. Strangers provided them with food, monks invited them to sleep at temples, and donations were made for future hotel stays. Their travels took them to the UNESCO Heritage Site of Yangdong Village, forest temples, steaming hot springs, and numerous villages and hamlets in the Korean wilderness. Using the Wonhyo Pilgrimage as inspiration, why not make your next trip less about visiting and more about exploring?