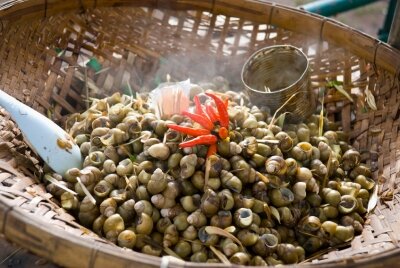 Cambodian food is a bit of a mystery. After the Khmer Rouge wiped out much of the country’s historical records – including cook books – what remains are recipes passed down through generations of families. Influences come from India, China and, later, France. And, like much of Southeast Asia, noodles and noodle soups are ubiquitous, as are coconut-derived ingredients and fish sauce. You’ll see root dishes, ancestors, of popular Thai and Malay foods, and some very local delicacies you’re unlikely to find elsewhere in the world – and for good reason in the case of fried tarantula.

Cambodia is still rebuilding itself as a tourist destination and while cosmopolitan upscale dining venues are present, they’re the exception. International foods – Italian, Mexican, Indian and Pacific Rim – also abound, but for some dishes that represent contemporary Cambodian cuisine and provide a glimpse Khmer culture and history, here’s a quick list of culinary must-tries.

In general, chili isn’t that widely used in Cambodia as it is in Thailand or Malaysia, so you can be less afraid of curries. And while freshwater fish are the main source of local protein, there are plenty of unconventional street vendor treats if you’re inclined to go all Man vs Wild.

Somewhere at the top of the list of adored regional foods is amok, a delicious cupcake-sized fish mousse served in a banana leaf – an early rendition of Thailand’s hor mok. Aromatic, creamy and lightly spiced, amok is available across all price points – from your “authentic” upscale restaurant to your local mom and pop store. In the latter, expect something more like a curry than a cake, with all the requisite flavors infused by a well-worn mortar and pestle.

Obviously noodles are a must in Cambodia as they are anywhere in Asia. We’re talking nom ban chok – rice noodles with broth, raw greens, mint and basil – typically served for breakfast. The noodles are made upcountry and brought fresh into the cities. Nom ban chok is a staple in Cambodian cuisine and even features in Khmer folklore, with claims of having been a precursor to noodles in China. There are regional varieties, so your Siem Reap nom ban chok will be different to your Kampot nom ban chok.

If you’re south of Sihanoukville in Kep, you might notice the local obsession with crab – a giveaway is the giant crab statue by the waterfront. This is also the home of Kampot pepper, an international hit and a big deal in Cambodian cooking. You can have both ingredients together in a plate of kdam cha – fried crab, green pepper, garlic and scallions. Truly transcendent.

Spiders are probably the most challenging of local snacks for those more used to running and screaming from them rather than sticking them in their mouth. The stuff of nightmares for arachnophobes, if you’re game the pay-off for eating a friend tarantula is a nutty, crunchy sensation – kind of like fried cricket. Dialing back the cringe-factor a little is snake stew – an age-old Cambodian dish that was reinvigorated in 2005 by chef Joannès Riviere at Hotel de la Paix’s Meric restaurant. Riviere has since moved to Cuisine Wat Damnak (cuisinewatdamnak.com) in Siem Reap, an enterprise that sources local produce to create Cambodian tasting menus. Wat Damnak’s cuisine changes according to season – they support the local women’s co-op and use produce they supply. You can expect fish from the Tonlé Sap (like puffer fish or fermented sanday fish), Cambodian fruits and fire ants, another local delicacy.

In a similar vein, Le Café Mith Samlan and Romdeng in Phnom Penh cook up classic Cambodian meals. They’re part of a group of restaurants that send proceeds back into the community and provide jobs and training for local disadvantaged youth. You can find fried tarantulas at Romdeng, and according to some reports, meet a live one.

Outside of Laos and Vietnam there is virtually no bread culture worth investigating in Southeast Asia, so finally, check out Cambodia’s baguette scene. The local way of eating a baguette in Cambodia (nom pang) is with scallions, cucumber, shredded salad and a few different forms of pork - minced and processed – all sweetened with lashings of coconut jam (kaya). In Kampot you can finish up with an ice cream baguette – probably not the healthiest snack, but if you tired of the tempura tarantula, you’ve probably earned it.

Sounds yummo to me. Tried Cambodian cuisine outside of Cambodia, but sounds like it's worth going there to try the real deal!
March 26, 2013 |