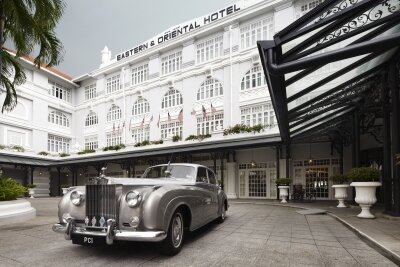 Of all the former colonial trading ports in Southeast Asia, none has retained its architectural heritage as much as Penang, Malaysia. The historical heart of Penang is Georgetown, an entire city listed as a UNESCO World Heritage Site on the northeast corner of the island. It is here that you will find the Eastern & Oriental Hotel, one of the great colonial-style hotels in the region.

The E. & O. (as it is also known) was established in 1885 by the Sarkies Brothers, a family that played a large role in establishing a number of luxury hotels across Southeast Asia, including Singapore’s famed Raffles Hotel. The Sarkies were four brothers, and a cousin, of Armenian descent who hailed from Isfahan in Persia (now Iran.)

It didn't take long for the E. & O. to become the place to be seen, for both the local elite and visitors alike. In the 1920s the hotel was promoted as 'The Premier Hotel East of Suez'. Famous guests who have visited over the years include Rudyard Kipling, Hermann Hesse, Somerset Maugham, Sir Noël Coward, Mary Pickford, Charlie Chaplin, and Michael Jackson.

As with many of the luxurious colonial era hotels in the region, the fortunes of the E. & O. went into decline after World War II, to the point that it was eventually closed down in 1996. Fortunately for Penang the hotel survived the wrecking ball, although sadly the same can't be said for many of its peers. The hotel was eventually restored by its new owner, The E&O Group, and reopened to the general public in 2001. The restoration tastefully maintained the old world charm and grace of the original building – stately marble floors, richly decorative woodwork and  service with a fine attention to detail – while updating the hotel and all of its rooms to modern standards. The property looks out across the Strait of Malacca and has a swimming pool and large seafront lawn, which makes for a relaxing place to retreat to after a day of walking around the city.

It’s also perfectly positioned for easy access to the best that Georgetown has to offer – it’s an easy walk to the historic core where you can see its mix of shophouses, temples, churches, and other monuments that were built in the age of British rule. As the entire city is a World Heritage Site, all of the old buildings are protected from demolition or modification, meaning that Georgetown has a mix of buildings in varying states of repair.

But it's not just the architecture that makes Georgetown famous. You can't talk of Penang without mentioning food, for which Penang is well known throughout the world. Malaysian food is represented by the three main ethnic groups of the nation - Malay, Chinese, and Indian. In Penang you will find the best of all of these represented, and if you like seafood you shouldn’t miss the signature dish of Penang, asam laksa.

Ana
I have stayed here many times. I was disappointed to have a slit in my sheets. Although it was small it was Noticeable and house keeping was just careless. This is not the standard at this location and I am sure management handled. It is not what goes wrong it is how they correct and the leadership wants to hear.
May 17, 2013 |