Hong Kong from below and above 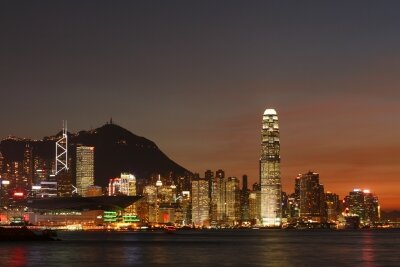 Hong Kong has long held a fascinating middle ground between east and west. Its British colonial past has heavily influenced everything from its political structure to the double-decker buses that zoom to and fro, while the city’s location in the heart of Asia has given it a spicy, distinctly Chinese personality lit by neon and laced with customs and culture from around the region.

Over the past several centuries, the area that is now generally known as “Hong Kong” – Hong Kong island, several small and large surrounding islands, and the chunk of land that extends down from mainland China called the New Territories – has been fought over, occupied, colonized and finally expatriated due to its strategic location and important role in the development of the region. Today, it’s one of the world’s great cities – a center of finance and shipping, a showcase for cutting edge tech, delicious food and soaring architecture, a travel hub, and a high-profile tourist destination.

Most international travelers arrive via the gleaming high-tech Chek Lap Kok Airport, which replaced the old Kai Tak airport that was, quite literally, in the middle of the city. The first thing any visitor must know is that transport-wise, Hong Kong is much like New York – defined by its extensive rail system and held together by good old fashioned walking.

Trying to cover the rail system – called the MTR – in its entirety is futile here. Suffice it to say that it’s in your best interest to learn how it works and where it goes. With 22 lines, over 215km of track and 152 stations in total, to call it extensive would be an understatement. First thing’s first – get yourself a rechargeable Octopus card, which gives you access to most of the lines, and a good deal of restaurants and shops as well, where you can ‘beep’ your card on a sensor and pay for your purchase. Indeed, it’s possible to explore the entire city underground, as most stations are subterranean mini-malls in their own right.

The famous Nathan Road is the ‘main drag’ of the city, a 3.5km north-south stretch lined with high-end boutiques that comes down from the New Territories right onto the Kowloon Peninsula, ending at the waterfront only 920m from Hong Kong island. This is one of several spots in the city that offer million-dollar views across the harbor, especially at night. Neon lights flash and shine, and glass & steel towers shoot up like bamboo shoots, illuminating the clouds above with a dull glow. This is also home to the Avenue of the Stars, a rather pale imitation of its cousin in Hollywood, California, but still a great place for a walk. Metallic stars for Jackie Chan, Tsui Hark, Chow Yun Fat and other famous icons line the walkway, and it’s capped with a statue of the city’s most famous export, Bruce Lee, poised and ready to strike.

If your kids (or simply your inner child) wants a bit of an adrenaline rush, you can head to Hong Kong Disneyland or Ocean Park for some rollercoasters, cable cars, rides, or games. Shoppers – and Hong Kong has a lot of them – can head almost anywhere and find something worth buying. Whether it’s a brand new Louis Vuitton bag, a nice new iMac, or a shiny red Ferrari, all of these brands and more have major official stores in Hong Kong. For those with a bit less disposable income, there are countless alleys, night/day markets, malls and vendors where you can find some real (and not so real) bargains. Most of these places can be found between the densely shopping mall-ed Central and Causeway Bay areas, but there also plenty of places to shop across the harbor in Tsim Sha Tsui (which locals simply call TST).

You want nightlife? Hong Kong’s got it. Head to the sprawling Soho area a short walk from the Central MTR station. The fact that it slopes steadily uphill for several kilometers doesn’t stop thousands of people from congregating at its endless restaurants, pubs, bars, discos and even the odd comedy club, helped along by the famous Central-Mid-levels escalators, the longest outdoor escalator system in the world that carries over 55,000 people every day.

And once you’re done exploring Hong Kong from underground and ground level, head to the Ritz Carlton hotel in the International Commerce Center for a view from the top. Ozone bar on the 118th floor will give you a wind-whipped view of the harbor and streets far below. The drinks aren’t cheap but they are expertly mixed – a great metaphor for a fascinating city made from so many different parts.