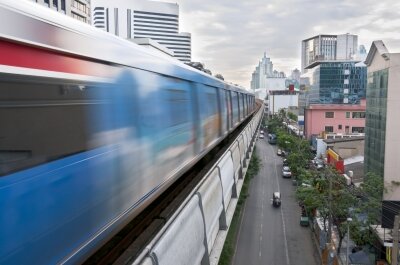 Getting around in a city like Bangkok – with its reputation for record-setting traffic jams – is a daunting task for anyone unfamiliar with the system. Standing on the corner you’ll see taxis, tuk-tuks, buses, trains, motorcycles – even boats if you’re near a canal or the river. But if you know a bit about how it all fits together, getting around is actually pretty simple.

The first rule to keep in mind is that Bangkok’s public transportation system is designed to be used in a modular fashion – that is, one single mode of transport is rarely enough to get you where you want to go. Sure, taxis can go door-to-door, but they’re also at the mercy of traffic jams, construction, and VIP motorcades that frequently shut down roads. Real Bangkok pros mix it up a bit – a taxi to the train, the skytrain to station X, a motorcycle taxi to your destination.

First – the trains. As of 2013, Bangkok has two skytrain (BTS) lines, one subway (MRT) line, and one airport link (SARL), with more on the way. All are accessed with single use cards/tokens, or stored value cards that you can recharge when they run out. There are also single or multi-day passes for tourists.

-  The BTS Sukhumvit line comes 6.5km south from Mo Chit station, then turns east, where it follows the main drag of Sukhumvit for another 15km, finishing at Bearing station. The BTS Silom line starts at the National Stadium station, goes east for 1km, then turns south, crossing the river and finishing up approximately 9km later at Talat Phlu station (two more stations – Wutthakat and Bang Wa – will open soon). These two lines – Sukhumvit and Silom – touch at only one point, Siam Square, and it’s here where you can transfer between lines. More info here.

-  The MRT subway is a bit easier, as it’s only one line. Starting near Chatuchak Market at Bang Sue station, it carves a giant, backwards C for about 20km until it terminates at Hualumphong Station near Chinatown. You can transfer to the BTS at three points – Sala Daeng/Silom, Suhkumvit/Asok, and Chatuchak/Mo Chit. More info here.

-  Similarly, the SARL Airport Link is a single line that runs from Phaya Thai (where it connects to the BTS) 20km east to Suvarnabhumi Airport. To be honest, unless you’re going to/from the airport, you probably won’t need to use this one. More info here.

Motorcycle taxis and tuk-tuks: These guys are the real workhorses of the Bangkok commute, as they’re able to weave in and out of traffic and take the smaller streets where taxis can’t go. Motorcycle taxis are identifiable by their bright orange vests and usually hang around busy street corners waiting for a fare. Tuk-tuk’s are a bit different – it’s best to flag these down, as the ones that hang out by malls or hotels usually – but not always – try to overcharge you. For both, settle on the price before you leave, and always ask for a helmet with a motorcycle taxi.

Buses: Buses are great if you know which number to catch and don’t mind waiting in traffic to save a bit of money. They’re cheap, but the attendant on board will rarely speak English, so you need to know the deal before you get on.

Khlong Boats: One of the biggest khlongs (canals) in Bangkok has one of the gnarliest transport lines – the Saen Saeb Khlong Boat. It’s cheap, it’s noisy, it’s stinky, and it’s a great way to cut right through the middle of town. Going from Phan Fa Lilat (about 1km away from Khao San Road) all the way through the middle of town to Wat Sriboonreung in Bangkok’s northeast suburbs (with a change of boats at the Pratunam Pier), it’s a great way to beat the traffic, but you have to be nimble and fast to get on or off when the boats slam up against the pier and the crowd of commuters makes its move.

River Boats: If you want to explore the river or travel to your destination by water, this is the way to go. Different from the tourist boats, these ‘water taxis’ stop at different piers along their route depending on which flag the boat is flying – orange, yellow, green or no flag. Each pier has a map that’s easy to figure out, and the price varies on distance, but is rarely over 20 baht. More info here.

The secret to getting around in Bangkok is familiarizing yourself with the rough areas each of these modes of transport cover, and then learning where they connect. Once you do this, getting around Bangkok becomes less of a challenge, and – dare we say it – may even approach being enjoyable!