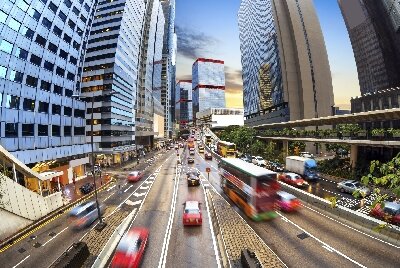 Hong Kong has it all – from subways and buses to affordable taxis and surprisingly speedy ferries. As compact as Hong Kong is, even your two feet have serious currency. Getting around a major metropolis doesn’t get much easier than this.

First things first: go to a 7-Eleven or MTR service counter and purchase an Octopus card. In a city where so many different transport companies are running routes by land, rail and sea, this all-in-one smart card is a lifesaver. Practically every form of public transit accepts the Octopus, and you’ll save yourself from that awkward standoff with a driver who needs exact change when you don’t have it.

Rail: Topping out at 70 km/h, Hong Kong’s mass transit railway (MTR) is your fastest option, and chances are good that it connects to where you’re going. If you’ve spent time trying to make sense of the signage in other major Asian cities, the MTR will be a relief. Both the signposts and onboard announcements are in English. The MTR sees an average of 5 million trips daily, but with such fast and frequent service, crowds aren’t usually a problem. But be warned: all bets are off during rush hour.

Eleven color-coded lines snake across Hong Kong’s districts and suburbs. Tsuen Wan Line (red) is the most important for visitors. It connects from Central to Nathan Road, passing under the harbor and stopping by Tsim Sha Tsui and several other stations along the way. The Airport Express service actually uses the Tung Chung Line (orange). It takes less than 25 minutes to connect from the airport to Hong Kong Island and includes an option for a free transfer to major hotels around Hong Kong and Kowloon stations.

Buses: Kowloon and the northern part of Hong Kong Island are well-served by the MTR, and you’re unlikely to need to use a bus. However, they’re handy for exploring the southern part of the island as well as the New Territories. Conditions are a little bit hectic. Several companies operate routes, and it’s hard to find a comprehensive map. However, final destinations are prominently displayed in English. Don’t count on the driver speaking English.

If the double-deckers are a bit much, consider taking a minibus. Green minibuses operate fixed routes, while their red counterparts are a little more flexible. Passengers pay upon boarding, and no more than 16 are allowed at a time.

Note: Most red and green buses are actually cream-colored. It’s the color of the stripe across the roof that counts.

Taxis: There are well over 18,000 of these vehicles in operation, and the combined fleet serves well over a million passengers per day. Taxis run on the meter and will have a red ‘For Hire’ sign displayed when available. At night, drivers illuminate the ‘Taxi’ sign on the roof if they are looking for a passenger. Fares are affordable – especially for a city of this caliber.

Most taxis are either red (in Kowloon and on Hong Kong Island) or green (in the New Territories), with a few blue cabs in Lantau. Green taxis are prohibited by law from entering the red-lands, so if you’re in the New Territories and would like to head for Kowloon or Hong Kong Island, you’ll need to take the MTR – or a bus if you’re feeling adventurous.

Ferries: You don’t have to use a ferry in Hong Kong if you don’t want to, but you owe it to yourself to ride the iconic Star Ferry at least once. It connects Central to Tsim Sha Tsui and operates a few other routes that aren’t as important to visitors. Amazingly, ferries can cross the harbor faster than the MTR or buses, and they cost less, to boot.

In a city like Hong Kong, using the transit system isn’t only convenient, it’s a part of the experience, so make sure to use it as often as possible. You won’t be disappointed!

Nice information about Hong-Kong! I had never been there but after reading this post lots of things I came to know. Thanks you so much!
December 4, 2013 |