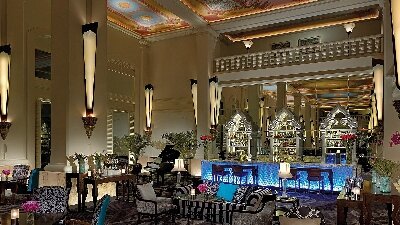 Leave it to the English aristocracy to turn a simple afternoon snack into a full-blown production, complete with artfully prepared petits fours (bite-sized snacks) that look so nice they actually invoke a twinge of guilt when bitten into. Just a twinge, though. I mean, honestly – you’re supposed to eat them.

Fortunately for today’s travelers, you don’t have to be a duke or a duchess to count yourself among the socialites at a high-brow afternoon tea affair. Some of the finest high tea affairs in the world are staged in five-star hotels across Asia – and particularly in former seats of the British colonial empire. To that end, let’s have a look at a few of the best places to enjoy high tea in Asia.

The Mandarin Oriental
Singapore is awash with extravagant high-tea affairs. Guests at the Mandarin Oriental’s Axis Bar and Lounge enjoy a five-course tea set and spectacular views of Marina Bay. The experience begins with champagne jelly and fresh berries, and it only gets better from there.

It’s the venue that makes this otherwise traditional high tea experience stand out. Guests gather in the Orchid Conservatory, a glass house filled with – you guessed it – exotic varieties of orchids. Only 15 people are admitted per session, so be sure to book in advance.

The E&O’s afternoon tea is as traditional as they come. Sets are lavishly served in the elegant 1885 Restaurant (named for the year the hotel opened its doors). Expect candlelit tables, starched linens and an exhaustive tea menu that includes locally grown varieties as well as imports from China and India.

Four Seasons, Bangkok
Well known amongst Bangkok’s jet-setters as one of the best places to dine on epic meals and refined snacks, The Lobby at the Four Seasons does its best to keep the reputation alive. Diners sit under a magnificent frescoed ceiling and partake in all manner of sweets, savories, and scones. For an extra kick, add a glass of champagne to end the affair on a high note.

One of Bangkok’s oldest and most respected hotels, afternoon tea is served in the Author’s Lounge, where names like Joseph Conrad, Noel Coward, and Tennessee Williams sipped and wrote. The atmosphere – all white rattan and bamboo – is appropriately posh, and tiered trays of scones, sandwiches and sweets will warm your belly.

The Strand, Yangon
The Strand stands out as a well-preserved architectural gem in a city where the word ‘crumbling’ applies to most of the colonial buildings. The Strand was a favorite haunt of Somerset Maugham, and I figure the grand old man of letters knew a fair bit more about appropriate tea service than I ever will. Afternoon tea is served in the Strand Grill.

The Peninsula, Hong Kong
If you experience only one high tea in Hong Kong, take it at the Peninsula. This is Hong Kong’s oldest hotel, and it began serving authentic tea and sympathy in a bygone age. The scones are made from an original (and closely guarded) recipe, and sliced cucumber sandwiches have presumably been on the menu for more than eight decades. Afternoon tea at the Peninsula is so popular, that reservations are simply not accepted, so plan on showing up a little before the 2 p.m. start time.

Staged in the Living Room on the 87th floor, afternoon tea at the Hyatt includes one of the finest views in Shanghai. The menu and service are traditional, and guests receive a two-tier stand stacked with sweets and refreshments. It’s worth calling ahead and booking a window seat for this one.

The Imperial, New Delhi
The Imperial is one of – if not the – finest hotels in New Delhi, and high tea is a must whether you’re staying here or not. Tea is served in a light and airy atrium, and after coming in off of the hectic Delhi streets, you’ll probably want to linger here for a while. Opulent surroundings and impeccable service will leave you feeling like a bona fide member of the Old World aristocracy.