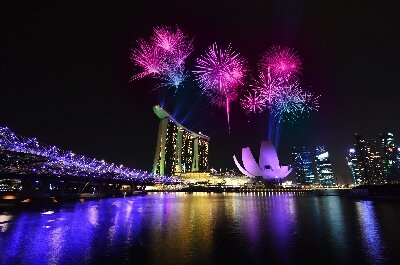 Spending New Year’s Eve in a strange city is always a bit daunting. Where do you go? What should you do? Where’s the best place to experience the holiday as the locals do? With that in mind, Agoda.com contacted some locals in Asia’s biggest cities and asked them where they’d go if they wanted a good show, some great fireworks, and big crowds of people celebrating their entry into 2014.

Many of the big hotels along the Chao Phraya River provide great views for a huge fireworks show at midnight, but reservations at restaurants need to be made in advance. Central World shopping mall hosts the biggest outdoor event, with several concerts, tons of food, and a great fireworks show right overhead at midnight. Bonus – the skytrain stays open extra-late to help revelers get home.

New Year’s Eve in Tokyo is a bit different than other places, as most celebrants head to temples to take part in traditional Buddhist or Shinto blessings. The most famous temple is without a doubt Meiji Jingu, considered one of Tokyo’s most beautiful and impressive shrines. There are tens of thousands of people here on New Year’s Eve, but it’s a pretty big place, so there’s always a chance to grab a bit of a breather on the sidelines. Go early to avoid the biggest crowds.

New Year’s Eve in China isn’t as raucous as other places – remember, the Chinese New Year in January is the major holiday of the year, but there are still celebrations happening on December 31. In Beijing, crowds head to The Place, a long street and shopping area with a 250m overhead screen, to countdown the New Year together. In Shanghai, head to Xintiandi, a large open-air shopping district, or Huaihai Road, another popular shopping/eating area. In both cities, many bars will be open late with various parties going on, and expect lots of bangs and flashes from fireworks all over the city.

From one of Asia’s biggest capitals to one of its smaller ones. Vientiane is certainly a quieter destination, but people still love to celebrate New Year’s Eve. The newly-renovated Nam Phou area will have music, food, drinks, performances, and a very festive atmosphere that everyone can enjoy.

New Year’s Eve in Manila = fireworks, and lots of ‘em. Plenty of big hotels put on their own shows, and the best place to see them all is overlooking Manila Bay from any of the restaurants, bars, or rooftops lining Bonafacio Drive and Bulebar Roxas. But don’t worry – even if you can’t see the bay directly, many, many private parties all over the city host their own home-grown fireworks displays.

Plenty of the bars and restaurants that cater to foreigners have their own parties set up, from small and intimate to large and extravagant. Some of the best ones are along Sisowath Quay, which runs along the Tonle Sap River. If you can get up to a rooftop you’ll have the best view, but pretty much anywhere will have lots to eat, plenty of music, a lively market vibe, and some good fireworks displays.

Thousands of people head to KLCC Park for New Year’s Eve in Kuala Lumpur. Located in the shadow of the magnificent Petronas Towers, the view of the fireworks overhead with the twin towers rising up to meet them is unbeatable.

If you’re in the city-state of Singapore, check out Clark Quay, which will have themed parties, live music, street games and, of course, fireworks. Alternately, head to Marina Bay, which will have a massive fireworks display, visible from any of the dozens of hotels and restaurants around its edge.

Head down to the Monumen Nasional (aka Monas), which will close off traffic for New Year’s Eve to accommodate the tens of thousands of people who come to countdown the end of 2013 under a blanket of fireworks. About a kilometer south is the Selamat Datang Monument, aka Bundaran Hotel Indonesia, which will also host large crowds and plenty of fireworks.

Really Bangkok, Tokyo, Manila & Singapore all these places are famous for New Year Eve celebration. But unfortunately I had never seen this new year celebration in these places but hope to visit it soon in coming year :)
January 13, 2014 |

Li @ Appartamento Toscana
Hello there! Thanks for the inspirational blog. The pix make me wish I was travelling rather than being sat at my desk right now. Thanks for sharing.
January 24, 2014 |