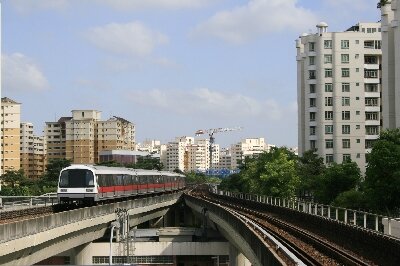 You’re never far from where you want to be in Singapore – and that’s just one more reason to love the local transit system. You can wheel around in a trishaw or board a bumboat to cruise the Singapore River and admire the skyline. For pure transit needs in this world-class city, you’ll find everything you need between the MRT, taxis and buses. And as with so many things in Singapore, you can expect that the infrastructure is going to be well-organized and spotlessly clean.

Residents and long-term visitors carry an EZ-Link stored value card, which covers both the MRT and bus networks and eliminates those awkward scrounging-for-change-in-your-pocket moments. If you’re just in the city for a few days, pick up a Singapore Tourist Pass for a few bucks per day and enjoy unlimited access to the MRT and buses.

Read on for a breakdown of Singapore’s transit system:

Rail: The mass rapid transit (MRT) and light rail transit (LRT) networks are safe, clean and reliable. Trains run from roughly 5:30 a.m. until midnight, with departures every three to six minutes depending the time of day. Around Singapore’s central hotel and shopping areas (think: Orchard Road, Chinatown and Little India), the trains run belowground, but they head up for air as you approach the outlying districts.

Part of the beauty of Singapore’s rail system (check out the map here) is its ease of use. You can buy a stored-value card from ticket machines at the station, and on-site signboards clearly lay out the routes and onward connections. If you’re one of those beauty-in-the-details types, go to the TransitLink office and pick up an MRT booklet for just a few dollars. It lays out the routes in detail, including connections with buses and expected fares.

Buses: Buses run a fine-toothed comb over Singapore and can get you virtually anywhere you want to go. They’re cheap and air-conditioned, but of course sensitive to traffic conditions. I won’t trouble you with the clean-and-efficient routine here. You’ve probably got the picture by now.

If the heat has got you down, the bus system has the potential to keep you cooler and more comfortable than the MRT network, as buses cut out the need to walk between the station and your onward destination. Better yet, use buses to fill in the gaps in MRT service. All you’ll need is a Singapore Tourist pass or EZ-Link card and the TransitLink booklet.

Taxis: Taxis are touted as the most convenient means of getting around Singapore. You’ll also hear claims that they’re cheap, which is true compared to cities like and Tokyo or New York. That said, Singapore taxis cost more than those in Kuala Lumpur, Bangkok and other regional capitals. But let’s be clear: you can make price comparisons with neighboring cities, but there’s no comparing the level of service you receive. Singapore taxis are the obvious champions.

The downside is that you may not be able to hail a cab in a pinch (and especially when it’s raining). If you’re having trouble flagging one down, have a look at the roadside. If it’s painted with jagged or double yellow lines, drivers aren’t allowed to stop. Given the surety of being fined, they’re not going to make an exception for you no matter how persuasive your hailing technique is.

Drivers know that they are in demand, and the system is set up in their favor. All taxis run on a meter, but the amount it charges depends on the time of day and which roads you use. Rates increase in the evening, and then soar even higher after midnight when the MRT stops running. Drivers are also automatically charged when they pass through gateways on some of the expressways, and these tolls are tacked onto the fare.

Overall, Singapore is one of Asia’s champions in terms of using transit to get around. It’s small enough to make transit convenient and covered well enough to provide a variety of options.

Singapore owns and operates by far one of the best public transport systems in Asia. Very well written and concise guide to the city and the country.
January 13, 2014 |

Alex Hamilton
It's hard to beat Singapore public transit. Would be nice if they add private cars services like Lyft or Uber as well.
March 17, 2014 |