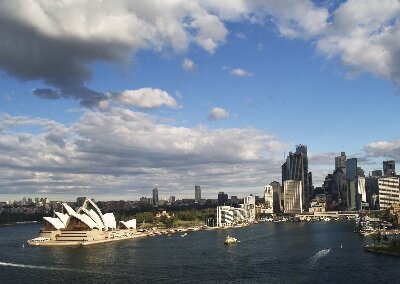 For many westerners, Christmas and New Year's Eve are typically associated with snowfall, chestnuts roasting on open fires, mulled wine, and generally being cold. In Australia, it's the middle of summer – this year predicted to be one of the hottest – and the open fires are hopefully restricted to barbecues charring festive flavor into sausages and steaks (and chicken for the vegetarians).

While it might seem jarring to those from the northern hemisphere to spend this time of year trying to avoid sunburn rather than snowstorms, Yule time in the "sunburnt country" is the best time to visit. Sydney – a notoriously grumpy city in winter – comes to life in the warmer months, outdoorsy activities come to the fore and there's a summer schedule of activities that includes music festivals, the performing arts, markets, cricket, and more. Many events are staged around the jewel in the city's crown – Sydney Harbor – giving you more of an excuse to enjoy Australia's brilliant summer weather.

If you're going to Sydney in summer, you're probably going to visit Bondi Beach. A weekend here can easily draw up to 30,000 people, but with more than a kilometer of sand (0.62 miles) there's enough space for everyone. Getting in and out can be hectic, but the array of restaurants, cafés and pubs within walking distance – Bondi Icebergs and the Beach Road Hotel, for instance – you can easily linger until most of the crowds have gone.

Bondi Beach Markets have been a Saturday mainstay for 18 years and provide a casual forum for local fashion, artisanal goods, gourmet food, jewelry and arts and crafts. In the evenings, the beachfront hosts the Flickerfest short film festival in the surf pavilion, an annual event that runs from 10-19th January, 2014. Travelers opting for a beach vacation can find convenient and affordable accommodation in Sydney around Darlinghurst or King's Cross.

New Year's Eve is a big deal in Sydney. The fireworks displays – at 9pm and midnight – draw millions of people to vantage points around and on the harbor. From lunchtime, groups can be seen laying out picnic blankets to secure the best position – the most popular viewing areas are around the Opera House and Mrs. Macquarie's Chair – both to the east of the Harbor Bridge. An all-night entertainment program keeps spectators entertained around the Opera House until countdown when the final fireworks extravaganza reveals the year's special Harbor Bridge message.

Around the city are countless New Year's Eve events – most of them geared towards youthful revelry, offering international and local DJs and bands until well into the wee hours. Then there's Field Day electronic music festival on New Year's Day, staged in the picturesque gardens of the Domain in the inner city. Some hotels in Sydney CBD are located close to the harbor and the domain, so travelers can really immerse themselves in the local New Year spirit.

There's always something going inside Australia's most recognizable landmark. There are daily tours of the Opera House, so you can get an appreciation for its architecture and design, but if you want to experience it as a performance venue, there are plenty of great acts on this year. The program is all-encompassing, including contemporary music (December sees Jack Johnson and John Legend perform), classic opera ('The Magic Flute' runs January through to the end of March), and comedy (David Sedaris does stand-up mid-December). Kid's programs (it's the school holiday break) and theater productions are also common throughout the season.

Sydney might not have the cultural caché of Melbourne, but it still has plenty to offer art lovers. The Museum of Contemporary Art in Circular Quay plays host to 'War Is Over! (if you want it)' by Yoko Ono, from now until the end of February, which includes a film component and talks by local artists. Over at the Justice and Police Museum, the City of Shadows exhibition offers a glimpse of Sydney's criminal landscape featuring fascinating police forensic photographs from 1912 to 1948. At the other end of the spectrum is the Game Masters exhibition at the Sydney Powerhouse Museum. With more than 100 playable games, this interactive exhibition showcases the best of gaming across all platforms, featuring the best arcade, console, PC and mobile games of the last 40 years.

Australia is a sports-loving nation, and summer heralds a new season of cricket, from domestic matches to the Ashes. The Sydney Cricket Ground hosts the five-day Ashes Test Match against England from Friday 3 January, 2014. The SCG also hosts One Day International matches, with a match against England scheduled for 19 January 2014.

An Australian holiday is not quite complete without at least one koala or kangaroo sighting, and Taronga Zoo on the harbour is one of the best places to achieve this. This summer the Lemur Forest Adventure opens, where visitors can watch lemurs in a simulated habitat and kids can play in jungle gym-like terrain. For getting close to the animals, there are special programs that let you feed the giraffes, and areas where you can pet a koala or a kangaroo, or hold a native Australian snake.

A major contributing factor to Sydney's social schedule is the Sydney Festival. A celebration of the arts, it runs from 9-27 January 2014 and encompasses music, theatre, art installations, family activities and dining across several indoor and outdoor venues. Paradiso at Town Hall is a big draw for music lovers, with nightly shows ranging from DJ sets to modern orchestra, while the free Symphony in the Park provides classical music under the stars, capped off with a fireworks display. One of the more internationally famous visitors of the Sydney Festival is Florentijn Hofman's five-storey Rubber Duck, floating in Darling Harbor from 5-23 January, 2014.

Have a Merry Christmas in Sydney, and don’t forget the sunblock!