Mongolia - Home of the Khans 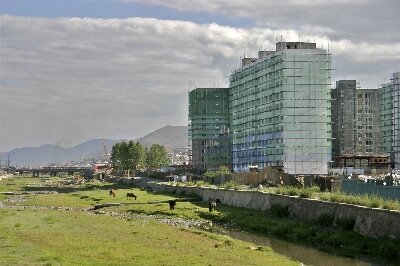 Genghis Khan and Mongolia are synonymous. Few country’s name and their former leader are known by so many yet visited by so few. This is a rugged land with rugged people who share a rich history, firmly rooted in tradition yet racing towards all that the modern world has to offer. Its capital Ulaanbaatar (UB), temperature-wise, is the coldest on earth, the countryside has little arable farmland, and it’s the second largest landlocked country in the world (Kazakhstan is first), making it a challenging place to survive in, let alone prosper. Perhaps this is part of the reason why more than half of Mongolia’s three million residents have moved to the capital, making it a rapidly changing city with a kaleidoscope of people, colors and flavors.

Ulaanbaatar’s name alone is exotic and far-flung enough to warrant a visit, and once there you will understand what being at the edge of the Earth is like. Tourists rarely visit in any substantial numbers and you might find yourself as a bit of an attraction. Most famous for its fearsome leader Genghis Khan (also spelled Chingis/Chinghis Khaan) who formed one of the largest empires the world has ever seen, you can see firsthand the type of harsh, barren landscape that shaped a legendary, brutal leader. Born Temujin, likely in 1162, he conquered most of modern day China, further south to what is now Vietnam, ventured in to parts of Myanmar and west all the way to eastern Europe and the Middle East before dying in 1227 and passing power to his son. Delving in to Genghis’ history and the legend should be an integral part of a visit and it’s easy to do, as images and info are everywhere. There’s even an Irish Pub bearing his name!

UB has been a nomadic Buddhist center since 1639, frequently changing locations until its current site, surrounded by low mountains, was permanently established in 1778.  Even today many residents still live in traditional gers – movable round tents – coming and going as necessary, renting land to set up house and moving on when needed. As a result there are few modern buildings of historical significance. That said, the mix of gers, temples and a number of modern skyscrapers that have risen over the last decade create a unique skyline.

Most temples and monasteries were destroyed when socialism flourished in the 20th Century, a period when Russia virtually controlled Mongolia, but a few notable ones survive and deserve a look. Gandan Monastery is the center of Mongolian Buddhism and features a very tall, golden Janraisig statue. There are a number of other charming buildings that make up the complex with tons of pigeons feasting on seed donated by visitors. Choijin Lama Monastery is in the center of town and while small, is significant as the former home of Choijin Lama Luvsankhaidav, before being shut down by the government in 1938 and turned in to a museum. An interesting feature is how it’s now juxtaposed amongst several large office towers, creating an interesting contrast and visual statement about the city’s past and present.

While downtown, which is easily covered by foot when the weather’s nice, hit Sukhbaatar Square, a central meeting place and the seat of government. It’s an ideal spot to people watch and get a feel for Mongolian state architecture. Stroll Peace Avenue, UB’s main thoroughfare and parallel Seoul Street to check out the action. A quirky feature and connecting road between the two is Beatle Street, unofficially named for the statue of the Fab Four which has inexplicably found its place in this unlikely corner of the world.

With official taxis nearly non-existent, finding a private car/driver is a very good bet for at least one day to explore sites a little further afield. Zaisan Monument sits on a hill at the southern end of town and memorializes Mongolian and Soviet soldiers who died during both World Wars. It offers a great view and an interesting perspective on how the city is laid out growing as apartment towers devour the countryside. Naran Tuul Black Market is a sprawling outdoor bazaar with everything on offer from gers to jackets and goat skulls. Pickpockets are notorious adding even more value to having a driver take you around.

Venturing into the countryside to get a sense for rural Mongolian life is a must and can be done in as little as a day, but is best coupled with an overnight stay at one of many tourist camps where you can sleep in your very own ger. Here you can ride a horse, hike, and most importantly marvel at the vast steppe, or grassland, that makes up much of this sprawling country. Terelj National Park is an ideal venue to do so and you can stop in at the 40m-tall Genghis Khan statue that’s en route. Venture inside and up his body to a viewing platform just below his head for another great view of Terelj National Park the surrounding country. From here, the world seems very big indeed, making his feats of conquest even more impressive.