All Aboard - Trans-Siberian Railway 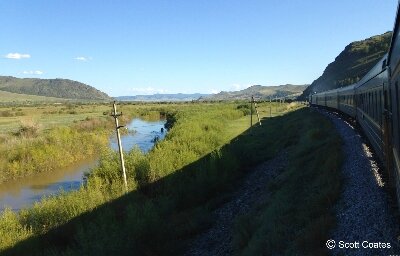 The words ‘Trans-Siberian Railway’ conjure up images of far-flung landscapes, exotic adventures and romantic isolation. Featured in countless books and movies, many intrepid travelers consider it a must-do on their global conquest list. Famous for being the longest single railway line in the world, it’s an impressive network that connects Russia’s capital Moscow and the country’s far eastern reaches at Vladivostok, some 9,289km away. It also links with other lines heading further afield to northeastern Russia, Mongolia, China and even North Korea. While the journey is indeed one for the ages, some careful consideration and planning are required to ensure it’s fun and memorable.

While locals use the train to travel portions of the line, most tourists start their journey in either Beijing or Moscow, traveling between the two capital cities, typically with a couple stops along the way to break things up. This route covers two lines, the Trans-Siberian and Trans-Mongolian, and comes in at a whopping 8,861km, taking seven days in a single stretch, which is not advisable. Being on the train itself is an exercise in passive exploration and a very different journey for those not accustomed to long trips by rail.

Starting in Moscow you’ll board either a Russian or Chinese train as both countries provide service along the route. Local locomotives and dining cars are attached and detached in various spots as you pass from one country to another, but other than that you’re on the same train the entire way. There are several different classes, from single seat, to a berth with four beds, to a private two-bed births, which is definitely the way to travel. None of these options is luxurious by any stretch and while some have ‘private showers’, they are often small and dirty, so it’s best to keep expectations in check. There are many places to read which trains and dining cars are best, but they vary from source to source and by no means apply to everyone across the board. Keeping an open mind and being prepared is the best way forward regardless of which train you’re on. (Pro tip: Be sure to offer your cabin attendant a small item like a chocolate bar early in the journey, as it’s always good to have friends in high places!)

You’re going to be cramped and likely get a bit of cabin fever along the way. This is normal and can easily be combated by walking the length of the train every few hours, heading to the dining car for a drink and to meet other travelers. Speaking of walks, the greatest moment for variety and freedom comes a few times per day when the train makes brief stops (typically about 15 minutes) at a station. Here you’ll jump off, go for a stroll along the platform and scurry about from shop-to-shop restocking your instant food, chocolate bar and drink supply. At some stations locals turn up selling homemade goods of varying quality and taste, which is hit and miss. But stay alert – when that train starts moving, you better be ready to go!

Bringing some freeze-dried food from home is a very good idea. Most outdoor shops sell pretty decent grub that’s easy to pack and just requires adding some hot water (available in all cars) to make it edible. This serves as a safe dining option that’s far less expensive than eating in the dining car. If you want a taste of home, bring a few boxes of wine to sip as you watch the landscape pass by.

While you could strap-in and knock the entire trip off in one go, it’s highly advisable to make at least one stop. For history buffs highly advisable, while only two days in to the journey, is a decent short break to see where the last Tsar of Russia, Nicholas II and his entire family the Romanovs, were put to death in 1918. It’s also near the Ural Mountains which divide Europe and Asia.

Further afield is Novosibirsk, Russia’s third largest city (after Moscow and St. Petersburg) and the unofficial capital of Siberia. It’s not terribly exciting but after being cooped up in the train for three days it’s a good place to enjoy a hot shower and walk around Siberia’s largest city.

Very early morning on Day 5 is when most people get off the train at Irkutsk, the jumping-off point for exploring nearby Lake Baikal. As the world’s deepest lake (1,642m) and most voluminous, containing 20% of the world’s unfrozen fresh water, it also serves as a wonderful spot for hiking and walks along its shores, and is a beautiful and memorable place to spend a couple of days.

Back on board it’s one more night to Mongolia’s capital Ulaanbaatar, a country well worth traveling for a week or so if time permits. On the final two-day stretch to Beijing you may end up on a Russian, Chinese or Mongolian train which also serves this route. Mongolian trains are generally quite new, by far the nicest of the three and worth trying to get on if possible for the final leg of the trip.

Once you’re safely in Beijing , sitting amid the glass and steel skyscrapers and high-tech shops, you’ll no doubt marvel at the more than 9,000km behind you, vast landscapes experienced and host of people encountered along the way. This is definitely one of life’s great journeys.