The Influence of French Cuisine in Modern Vietnamese Food 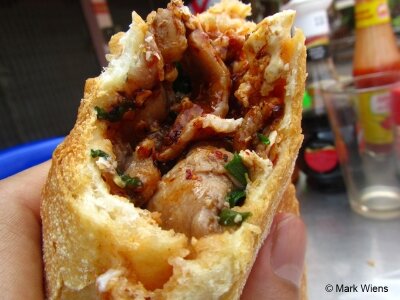 From the moment you arrive in Vietnam, you’ll be immersed in a world where there’s something tempting to eat everywhere you look. Vietnamese food is a diverse blend of healthy herbs, meat and seafood that’s packed with flavor, and delicious bowls of soup noodles that burst with freshness. Along with ancient and traditional recipes, there are numerous modern culinary creations made possible by the introduction of foreign ingredients.

Vietnam has a long and interesting history that has been shaped by the influence of many outside forces. While we won’t tackle everything here, it was during the Nguyễn Dynasty in the 1800’s, when the French established a colony in Vietnam, when things started to change rapidly. Among many things, the French brought their own food, which slowly but surely began to permeate into all aspects of Vietnamese life. Potatoes, asparagus, cauliflower, lettuce, and carrots are just a few of the ingredients introduced by the French that are now used so frequently in local cooking that they are considered a part of Vietnamese culinary culture.

Perhaps the two most noticeable aspects of modern Vietnamese food that were inspired by the French are coffee and baguettes. It’s hard to walk more than a few meters in any city in Vietnam without getting a whiff of dark chocolatey Vietnamese coffee, or noticing a pile of freshly baked light brown loaves.

Coffee has been a major part of French culture since the 1600’s when it was introduced to the royal courts of France from the Middle East, where it soon became a highly sought after beverage. When the French colonized Vietnam, coffee was on their minds, and it didn’t take long to set up sprawling plantations in the country’s fertile soil. Nowadays Vietnam is the world’s second largest coffee exporter and drinking Vietnamese-style coffee is one of the joys of visiting. Different from French coffee, Vietnamese coffee is sweetened with condensed milk and often enjoyed over ice.

You may also have heard of Vietnamese bánh mì, which translates to any form of bread. However, the term has become synonymous with the widely popular Vietnamese sandwich. It begins with a crusty baguette that’s sliced in half, spread with a thin layer of butter and pâté, stuffed with a variety of meats (both grilled and cured), and topped with fresh daikon radish pickles, onions, and cilantro. The result is a truly remarkable fusion of French and Vietnamese tastes that’s ready to eat on the go.

Along with Vietnamese sandwiches, bakeries and sweet breads, desserts are also extremely common. Chocolate-filled croissants and other tantalizing pastries are common Vietnamese treats that originated in France.

Undoubtedly, one of the top reasons to visit Vietnam is to take advantage of their amazing food. Indeed, a visit wouldn’t be complete without a typical Vietnamese afternoon – pull up a five-inch plastic stool on the sidewalk of a busy street, watch families of four cruise by on a single motorbike, and enjoy some of the most delicious Asian-European fusion food available.

Vietnam food is so delecious, but the first time i heard that french cuisine has influence on it, is there other infuence from countries?
March 27, 2013 |