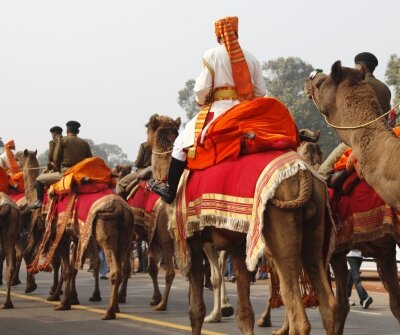 If you are anywhere near New Delhi in late January, then you have a treat in store, for on 26th January India celebrates its Republic Day. In fact, the holiday is celebrated all over the country, in every town, with flag hoisting, parades, military reviews, cultural programs and more, but the Parade To Beat All Parades takes place in New Delhi. This annual extravaganza really is one of the more spectacular events of the year and is a set piece absolutely not to be missed.

Tiered seating, for which you need a (very modestly priced) ticket, is set up on both sides of the broad avenue, and though security is strict the mood is one of friendliness. That being said, certain things – like cameras – are banned. Make sure to read the instructions on your ticket carefully for a list of banned items, as there is nowhere to deposit cameras, phones, food, drink and anything else you might have felt like bringing along.

The parade opens with a dramatic Air Force fly-by, during which the lead plane showers flower petals on the President and his guests, while the stoic, horse-mounted President’s Body Guard trots below, pennants a-fluttering.

Air Force acrobatics overhead are matched on the ground by a display of the latest military hardware – giant ballistic missile launchers, tanks and other machines of war – and then precision marching by some of the country’s finest regiments, all turned out in their brightest ceremonial finery. However little one may like the idea of warfare or pageants trumpeting military might, I defy anyone to avoid getting caught up in the musical and visual splendor of the event. One highlight is when unique Bikaner Camel Corps strut past, their over-the-top mirror-work harnesses twinkling in the winter sun, amid the applause and cheers of the crowds.

After this come cultural performances from skilled artists representing selected states, with all manner of dancing and drumming, as well as floats representing regional achievements.

Huge cheers are always reserved for a small group of children who each year receive bravery awards from the President. As each child goes past, his or her story of bravery is told - rescuing a sibling from a raging river, saving a friend from being attacked by a leopard, fighting off robbers, etc. Some of the children are very, very young, and you wonder how on earth they found such courage. Until very recently the children rode down Rajpath on elephants, but safety concerns now has them riding in jeeps – safer but far less exciting.

The parade usually closes with an absolutely amazing display of trick motorbike riding by the Army’s dispatch riders. Zooming backwards down Rajpath reading a newspaper, rolling steadily along with 5 or 6 others in a human pyramid above the driver – the kind of clever, show-offy stuff that’s always a guaranteed crowd favorite.

By lunchtime, the parade is over, with the crowds dispersing in a cheerful, upbeat mood, while the final Air Force fly-by showers everyone with confetti in the national colors – green, orange and white.

To mark the end of Republic Day celebrations, a poignant ceremony called Beating Retreat takes place on the evening of the 29th in front of Rashtrapati Bhavan, the Presidential Palace. Dating back to the 1500’s the ceremony was used to recall military units patrolling nearby back to base, and is today performed in India to the accompaniment of regimental bands before an invited audience of diplomats, politicians and VIPs – sorry, no public viewing.

But before you give up in despair, take note that regular folks can observe the dress rehearsal of Beating Retreat that takes place the day before, on 28th January – at Rs50 per ticket, it’s one of the city’s best bargains. The only thing you don’t get to see at the rehearsal is the President himself. His car comes, though, to practice timing, so you’re not completely short-changed.

Don’t forget to stay for a spectacular display from the massed pipe and drum regiments, who every year play the moving Christian hymn “Abide with me,” which was a favorite of Mahatma Gandhi.

As sunset ends, and darkness falls, the short, 45 minute ceremony comes to an elegant conclusion. Finally, the entire complex of the Secretariat Buildings and Rashtrapati Bhavan is suddenly illuminated in a breathtaking burst of thousands of lights. There is a collective gasp from the crowds, so pretty is the effect.

However many times one has seen this, it is always an exciting, dramatic ending for an exciting and dramatic day.

In India, Republic Day honours the date on which the Constitution of India came into force–on 26 January 1950–replacing the Government of India Act
January 27, 2013 |

bart
This holiday looks like lots of fun. Very colourful camels! We have Canada Day here in Canada, and fireworks is the big activity.
February 1, 2013 |

Martin E
I think your celebration is the same as the July 4th celebration of the United States. But I don't think there's an equivalent celebration in the UK. I think it would be a good idea to watch this parade next year. :)
September 17, 2013 |