How to order noodle soup in Thailand 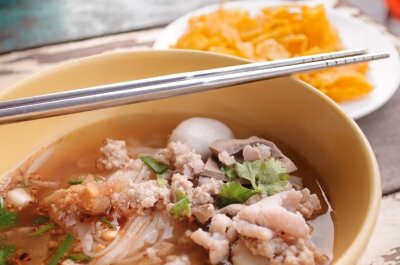 I’m not ashamed to admit it. The first few times that I tried to order a bowl of kuay tiaw (noodle soup) in Thailand, I failed miserably. It’s not that I didn’t end up with a bowl of noodles. I just didn’t have the answers for all of the questions the vendor asked me. Who knew there were so many variables at play?

While it’s certainly not rocket science, your first trip to the local kuay tiaw stand can be intimating. So before you take your first plunge into Thailand’s favorite late-night snack, take a moment to review the formula. While the order of your selection doesn’t really make a difference, the following ingredients are listed in the order that most people choose them.

Most Thai people begin their noodle soup order with the type and size of noodle. These are the four main choices:

The choice of noodle has more to do with texture than it does with flavor. All the same, there are some very opinionated kuay tiaw lovers out there who swear that their noodle of choice is superior to the others in every way.

Everything noodles lack in flavor is made up for in your broth. Some people order their noodles without broth (haeng, or ‘dry’), though you might as well order a pizza without any sauce. Still, for some, broth-less noodles have their place – the broth is usually served on the side, anyway, to sip on separately.

Assuming you’re as stubborn about the importance of broth as I am, you’re left with three main choices in this category:

The real secret of the most popular stands is all about knowing how to craft a spectacular broth. Even at the franchise guay tiaw stands, where all of the meat comes from the franchise’s processing plant, the recipe for the broth is still up to the vendor.

You’ve got a base noodle soup now. All that’s left are the trimmings. Pork and chicken are the two types of meat seen most in Bangkok, and pork and beef in Chiang Mai – regional factors are certainly at play. Fish (fish balls especially) and duck are also on the menu at some stands.

You can also order your noodles with luk chin, processed meatballs that are perpetually being fried, skewered or cooked in soups at nearly all hours in Thailand. Luk chin is sold as ‘pork balls’, ‘fish balls’ and ‘chicken balls’. Make no mistake – this is mystery meat at its finest. And it’s also about as popular as a hot dog at a baseball game. And you know what they say about hot dogs …

This is about as far as your noodle vendor can take your bowl of kuay tiaw, though there are a few more trimmings you can add. Color the broth with red bean paste, and your kuay tiaw becomes yen ta fo. This variation is usually served with fried crispy wontons, though these can be added to any style of Thai noodle soup.

Once the vendor drops the bowl of noodles at your table, you’ve got to dress it up and make it your own. Every table should have a little hand carrier (puang prik) with four kinds of seasoning in it. Aficionados are serious about how much of each condiment makes it into their soup. It’s always some combination of the following four:

The fish sauce should be in a separate bottle on the table – it might smell unappetizing to newbies, but after a while, you’ll be surprised how addicting it can be. In its place, you may see a reddish chili concoction, which has the sour vinegar punch with added spiciness.

If you visit Phuket the only place to order your noodles is Mee Ton Poe in Phuket Old Town - their Hokkien noodles are the best there are.

Howard Johnson Hotel wet n wild
I am vegetarian so i like veg noodle soup.In Thai noodles i like Sen lek.It was so yummy.Thanks.
August 23, 2012 |