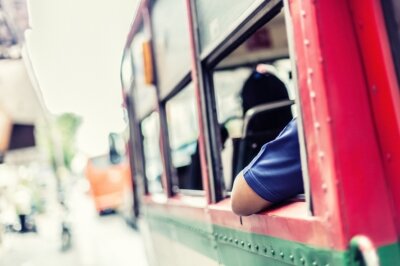 Taxis might be cheap in Bangkok compared to those in other world capitals, but they’re not always the best option. Some don’t want to turn their meter on, some might not know where it is you want to go, and some will outright refuse to take you anywhere at all.

The BTS Skytrain and MRT underground still have limited reach making Thailand’s buses worth mastering to get to outlying towns and provinces without having to pay for a taxi or private car. In the metro area tickets range from free to 18 baht, up to a maximum of 1,500 which gets you an overnight VIP government bus all the way down to Phuket or Hat Yai. The bus system is not always easy to decipher, however. So here’s a guide for first timers.

Within the Bangkok metro area:

First of all, do some research by visiting BMTA for an overview. The maps aren’t very helpful (at the time of blog post), but the route/bus numbers are listed for all major tourist attractions. If you have the time (some bus routes snake around the entire city and get stuck in traffic for ages), you can get anywhere in the city for a few Thai baht.

There are different colored buses for different zones (The Wikipedia page has a good guide to the routes and bus colors). The names on all of the buses are in Thai and they don’t really so much stop as slow down just enough for you to jump on and off. This requires knowledge:  you have to know the route number and know when to pull the cord/push the button when you reach your stop. Have a fellow passenger alert you if you’re not sure.

Once on board, wait for the ticket collector to give you a ticket and hang on if you don’t have a seat – Bangkok bus drivers have been known to bend the laws of physics. Buses can also get packed during weekday peak hours, so don’t expect much elbow room at these times, or avoid buses all together.

Free buses:
For a literal free ride, there are free buses, which may be hard to spot at first, but once you know them, they are easily recognizable. These are just regular buses, so the key is to spot the blue banners with Thai writing draped across the driver’s dash board, at the top the windshield, over the side door and/or on the back window. If in doubt, just point and ask: ‘Free?’

From Ekkamai:
The Ekkamai terminal is easy to reach — it’s right near the Ekkamai BTS stop. Buses here serve destinations on the eastern side of the Gulf of Thailand, from Pattaya to Leam Ngop pier in Trat province. You can head to the station to book a ticket a few days in advance or just arrive a few hours before you plan to depart.

From the New Southern Bus Terminal (Sai Tai Mai):
This is a big terminal with a mall, food court, market-style stalls, chain restaurants and dozens of platforms —  though all are clearly marked. Buses service all the major destinations on the western side of the Thai Gulf , including Hua Hin, Chumpon, Koh Samui, Phuket, Krabi and Hat Yai.

The trickiest part is getting here. Sai Tai Mai is at least a 30-minute drive from Hua Lumphong train station or Wongwian Yai BTS – up to an hour (or more) during rush hour traffic on a Friday, when hailing a cab is nearly impossible. Most of the overnight buses leave between 7pm and 9pm, so it is worth leaving the center of Bangkok earlier (4pm at the latest) and killing time at the terminal to avoid peak hour traffic and potentially missing your bus.

The fastest way is via cab from Hua Lumphong station or Khao San Road. Wongwian Yai BTS is a similar distance, but cabs are harder to find here. For travelers with minimal luggage, there are public buses (no. 515) and minivans departing from Victory Monument that go to Sai Tai Mai. Bus tickets can be booked at the terminal (signs are in English), but for long weekend travel it’s better to book a week in advance. The simplest way is through a local travel agent.

Caution: there is an old Sai Tai station, but most cab drivers will know not to take you there.

Mo Chit Bus Station:
Similar to Sai Tai Mai in size, this station services all the major destinations in northern Thailand and northeastern Thailand (Isaan): Kanchanaburi, Chiang Mai, Chiang Rai, Nan, Mai Sod, etc. The station also serves a handful of southern destinations. You can take a cab there or the BTS to Mo Chit station and then a cab (it’s too far to walk).  This is a big terminal, with English signboards, food stalls, ATMs, stalls, shops, ticket booths, restaurants and massage shops.

If you’re really pinching pennies, hop on an airport express shuttle. Four different routes cover a loop of popular Bangkok hotels – especially handy if your hotel is one of the stops and you have heavy luggage you don’t want to cart around the Airport Link (rail) terminal. The shuttle is 150THB, though it only operates between 5am and midnight and obviously isn’t as direct as a taxi.

Great post, my girlfriend and I panning to visit Bangkok for 3 days I was looking around Google to find many info about Bangkok.
Thanks for your nice sharing
June 17, 2012 |