Las Vegas of the East: Macau 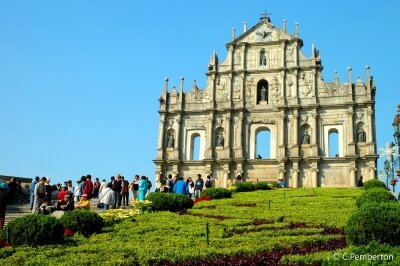 If ever you wished to see contrast personified in front of your very own eyes, then head to Macau – it’s hard to imagine a bigger mix of timeless history and frenetic development occupying such a small space.

Macau is geographically part of China, but was historically part of Europe for some 350 years. When Portugal handed back this tiny parcel of land to China in 1999, it was the last vestige of the once-significant European occupation in the country.

Macau, like its bigger glitzier neighbor Hong Kong, is now a special administrative region of China – in effect, it’s China-but-not-quite-China, and that’s what makes it so intriguing.

Indeed, its history is full of interesting tidbits – for instance, there used to be two rather sleepy little islands called Coloan and Taipa that were connected by bridges to the Macau peninsula. But when progress came knocking in the 17th century, the land between the two islands was filled and reclaimed and presto, one much bigger island was the result.

But even after all the changes, traces of 350 years of Portuguese rule remain. For instance, road signs, shops, and menus are all still in Portuguese – but the most obvious is the architecture. The old, colonial buildings are wonderfully rococo European, with little forts and churches standing as solidly now as they have done for the past three centuries. There are quiet little piazzas and cobbled streets, but you do have to look for them, and treasure the fleeting moments of silence they offer away from the din.

Because all around them 21st century China has mushroomed at a breathtaking pace. High rises, hotels, casinos – ah, where would Macau be without casinos? – jostle for space, each one more fantastic and eye-catching than the other. Weird and wonderful architecture, mile upon mile of glitz, reclaimed land, and enough neon to rival Las Vegas - that is Macau today.

All paths in Macau lead to the historical showpiece, the ruins of St. Paul’s Cathedral, which was built in 1602 and destroyed by fire in 1835. Although only the southern stone façade remains today, it is much visited and much beloved, though the shop-ification of the narrow cobbled streets around the cathedral may come as a bit of a shock. The slender pathways were empty and quiet 20 years ago, but now present a buzzing commercial district, where, should you choose, you can buy HK$40,000 bottles of wine. Still, the view from the top of the steps is pretty fantastic, the skyline of Macau laid before you in all its spiky glory.

Puff up the hill even further, climbing up behind St. Pauls’ to the Fortaleza do Monte, a 16th century fort with even more amazing views of the skyline. There are cannons all around the battlements, and inside the gardens, the Macau Museum.

Situated on the southwest tip of the peninsula is the A-Ma Temple, a Taoist temple built in 1488, and dedicated to Matsu, the goddess of seafarers and fishermen. It is always busy and crowded, the ceilings festooned with hundreds of huge, fabulous incense spirals, and offerings to the deities hanging from the branches of every tree.

But the main reason huge crowds of mainland Chinese flock to Macau, especially during holiday times, is to gamble. There are casinos literally everywhere. Huge luxurious hotel complexes have been built, the largest being the uber-glamorous The Venetian Macao, a Las Vegas-owned sister to the namesake hotel in Vegas, and currently the world’s largest casino.

It’s no surprise to learn, then, that gambling tourism is Macau's biggest source of revenue, accounting for some 50% of the economy, and after the large foreign-owned casinos started operations there, Macau quickly overtook the Las Vegas strip in gaming revenues. And of course, when all the lights come on in the evening in a blaze of neon for mile upon mile, it is quite a wonderful, glowing testament to both beauty and luck.

But to step back in time, take a bus from anywhere on the peninsula to the island(s) and once you are past the rows of expensive residential tower blocks, you quickly get back to an older, rural, more peaceful and traditional Macau, especially in Coloane. Beaches, thick wooded trails, and families out for a stroll are in delightful contrast to the glitz and shimmer of new Macau. But hurry – at this pace, the already scarce traces of an ornate, colonial past won’t last too much longer.