India’s Dussehra Festival: The Battle of Good vs Evil 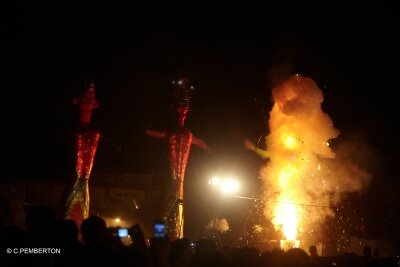 Take a brave group of gods and heroes and a beautiful virtuous queen whose legendary stories every Hindu knows by heart. Add a really, seriously nasty evil demon king and then throw in a spectacular open-air burning of the huge effigy of said evil demon king and ten days of celebrations, prayers, feasting and traditional plays, and you have (in a very rushed and inadequate nutshell) the Hindu festival of Dussehra.

Every year in October, as the cooler winter climate starts to dilute the harsh Indian summer, the season of Dussehra begins, signaling a stretch of pleasant weather and noisy, public festivities.

The festival itself is actually preceded by nine days of prayers and celebrations, and is the best time to experience the visceral punch of a Ramlila, a performance of the story of Ram and Sita and their conflict with the demon king Ravan.

Much like the colorful Bollywood films known the world over for their energy and emotional zest, Ramlila’s recount these much-loved legends in vigorous song and dance.­­ Ramlila’s vary from simple village productions to spectacular traditional performances, such as those in the Uttar Pradesh city of Varanasi, that last for an unusual 31 days. Here, traditional roles are handed down from generation to generation within the same family, such is the prestige of acting in one of these sacred plays.

Since everyone knows the story of Lord Ram and Sita by heart, watching a Ramlila production is an exercise in nostalgia and familiarity, and a perfect time for friends and family to come together – after the show, crowds drift home, talking, singing, and eating (usually vegetarian snacks during the festival). At this point, good has been overshadowed by evil, as the demon Ravan captured the virtuous Sita, but everyone knows that on the final night of the festival, after a long and epic battle, good will once again emerge victorious.

And so, on the evening of Dussehra, as the sun is setting, huge crowds flock to parks and communal grounds, where enormous bamboo-and-paper effigies of the evil king and his equally wicked sons are erected. Brightly painted and standing 20 or 30 feet tall, the images are torched to the cheers of the crowd who has come to see evil vanquished for another year.

Sometimes there are interesting twists that add a contemporary dimension to the ancient tradition. A popular production in Delhi every year adds a fourth effigy meant to represent a social evil or problem that affects the city. People to vote on what that effigy should represent and once chosen, a symbolic burning of the problem takes place, uniting the city around the elimination of a common problem – at least for another year.

In the last few days before Dussehra in Delhi, all roads lead to an otherwise unremarkable suburb in the west of the city, where itinerant craftsmen converge to make the effigies that will be burned. Hundreds of huge bamboo heads and bodies line the streets – heads on one side, bodies on the other – with jolly looking crowns and as-yet-unpainted faces laid out everywhere else as preparations inch toward completion. Gangs of workers carefully load the constituent parts of one demon king after another onto fleets of vehicles for delivery all over the city and surrounding areas, where families, friends and groups of all sizes can celebrate without having to leave the comfort of their homes.

Dussehra is yet another example of a vibrant, Indian festival that delights locals and amazes visitors as they travel through this exotic country. Indeed, festival preparations themselves are as much a metaphor as the festival itself – making these effigies of reviled demons is a thriving, lucrative business, employing many people, thereby proving that good can indeed come from from evil.

The Durga ( “Nari Shakti” the divine feminine force) emerged from the collective energies of all of the gods, including Shiva, Vishnu and Brahma, to vanquish the demon Mahishasura who could not be defeated by any god or man. She is thus the compassionate savior of all of the gods and the universe.
September 20, 2013 |