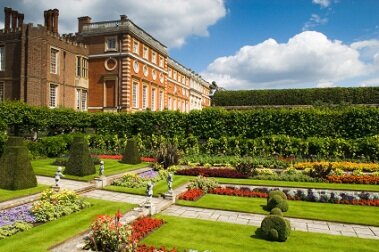 On one hand, it is grand like Louis XIV’s Palace of Versailles. On the other, it is quirky and intricate. Set in the swish London borough of Richmond, Hampton Court Palace was built in 1514 by one of Britain’s most memorable monarchs, Henry VIII, for his right-hand man Cardinal Wolsey. A few years after being built, Wolsey fell from favor and the King took it off him permanently. Typical Henry.

Thank God that modern British monarchs are much nicer than Henry. As the day of the wedding between Prince William and Kate Middleton nears, discover more juicy facts about the old royal rogue’s home.

1.     The initials of Henry and Anne Boleyn were carved into some of the stonework – the initials 'HA' were referred to as 'Ha Ha' by those happy to see the tragic queen beheaded for a bunch of suspect reasons -- sorcery, adultery, and treason.

2.     One distinctive feature of Hampton Court is the red bricks deployed to build it. Only the Tudors at the top of the pecking order could afford to build in brick, which was seen as the new, fashionable, luxury material.

3.     John Skelton was a poet and a tutor to Henry VIII. Skelton wrote the following Hampton Court Palace poem which mirrored the views of Tudor people:

‘Why come you not to Court?

To the king’s court?

Or to Hampton Court?

Should have the excellence

4.     In the great hall with the carved hammer-beam ceiling, Henry VIII would dine in state, his table rising just above the others, just in case anyone forgot who was boss.

5.     The palace is actually two palaces fused together like a dodgy car. After the original built by Wolsey, St. Paul’s Cathedral architect Christopher Wren designed an annex.

7.     The gardens contain a maze commissioned by William III of Orange in the 1690s, which you can still explore.

8.     During the Tudor period, the palace hosted many dramatic events. In 1541, while attending mass in the chapel, the King was told of his fifth wife's adultery. The Queen, Catherine Howard, was dragged away, screaming, from a gallery leading to the chapel. Her ghost is said to haunt it.

9.     Hampton Court served as the setting for Charles the First's honeymoon with his fifteen-year-old bride, Henrietta Maria in 1625. It also served as his prison when the country was taken over by Parliamentarians, who occupied the palace in 1645 and held onto it until the monarchy returned in 1660.

10.    When George III became king in 1760 , he abandoned Hampton Court as a royal residence. The des-res was divided into grace-and-favor apartments for the wildly wealthy. Today, it serves as a splashy event venue and attraction synonymous with Henry VIII.

Hampton Court Palace borders the Thames in the southwest of Greater London, near Richmond. The easiest way to reach the palace is by South West train. From Waterloo Station in London, the trip takes about 35 minutes – you get out just down the road from the palace. If you visit during summer and have time, a trip from London to the palace by Thames riverboat enticingly mirrors barge trips by the Tudors from Westminster, London, to Hampton Court. The trip takes up to four hours.  For more information, click here: www.hrp.org.uk/HamptonCourtPalace/hamptoncourtadmission. View current London hotel deals and promotions.