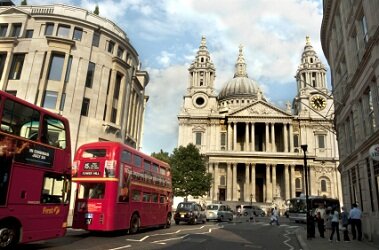 If St Paul’s Cathedral had feelings, it might be feeling confused, jealous even. The reason: the cathedral was snubbed as the venue for the April 29th wedding-of-the-century between Prince William and Kate Middleton. Westminster Abbey won that honor.

According to rumor, enlisting St Paul’s would have troubled Prince William, raising the spectre of the 1981 St Paul’s Cathedral wedding between Prince Charles and Diana.

Irrespective of whether the rumor is true, St Paul’s looks set just to play a cameo royal wedding role, popping up on the procession route. To make it up to St Paul’s, this week this blog will give the domed, radiant landmark the attention it merits.

St Paul’s is surprisingly deep – a past arena for dramatic events reaching back into Britain’s feisty, murky history. The facts suggest that, if you understand St Paul’s character, you have a handle on the whole country.

1.       Today’s St. Paul’s is actually the fifth religious building on the site. The very first was made out of wood, and burnt down in 675 AD. The second was sacked by the Vikings in 962 and swapped with a third, sturdier stone building.

2.       The fourth building – ‘Old St. Paul’s’ – was founded by William the Conqueror after the Norman Conquest. It suffered fire damage in 1087, and again in 1136, setting the builders back. People must have wondered if the cathedral would ever be finished.

3.       The cathedral was finally completed 200 years later, only to fall into disrepair then be stripped during Henry VIII’s dissolution of the monasteries.

4.       In 1561, cementing the suspicion that the cathedral was jinxed, a lightning strike zapped the spire.

5.       James I undertook major renovations, but these were halted during the English Civil War. During Oliver Cromwell's civil war rule – 'the Commonwealth' – Parliamentarian yobs inflicted acute damage on the building’s fabric. Windows, statues, carvings and the nave roof were smashed up. The Parliamentary army used the nave to stable their horses and later rented the porch of the cathedral to small businesses.

7.       Rebuilding the cathedral came into the hands of virtuoso architect Christopher Wren. His first idea – a straight replacement – got the thumbs-down treatment. His second idea was to build a cathedral in the shape of a Greek cross. His third, successful idea was accepted in 1675 and completed in 1710, according to the cathedral's website.

8.       Wren’s masterpiece boasts the second-largest dome in Europe (after St. Peter’s in Rome).

9.       The Whispering Gallery is St Paul's best-known attraction. Climb 259 steps into the lower part of the dome and, if you whisper on one side of the gallery, someone can hear it on the other side.

10.   The crypt is the largest in Europe and hosts memorials of some of the country's greatest men including the tombs of the Duke of Wellington, Admiral Nelson and Sir Christopher Wren. Wren’s epitaph famously says: "If you seek his monument look around you."

Admission: Adults - £6, children - £3. The London Pass can save you the cost of admission to St Paul's.

Opening hours: Monday to Saturday from 8.30am, last admission for sightseeing 4pm. Always check before you go, because the Cathedral is sometimes closed for special services.

St Paul's Cathedral might wanna extend their sightseeing admission from 4pm to a later time, because some visitors/tourists might not be available that early, especially those who are on business trips and would wanna use some of their available time to take a look at that historic place.
June 14, 2011 |