Insider guide to 48 hours in London 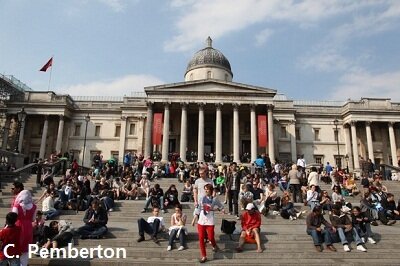 So, you have only 48 hours in London and want to see everything?

Well, not everything, obviously, but as much as is humanly possible, whilst not neglecting to sleep, eat, shop, and have a pint in a pub.

The best way to get an initial (and literal) overview of this marvelous city is to take a tour on an open-top bus.  Get your bearings, see all the major sights in one go, and then, the next day of your all-too-brief two-day stay in London, you can go back and visit select places in more detail.

Many companies do these tours, most of which are hop on-hop off, so you can happily spend one whole day being driven around London, and deciding when and where you want to get off, sight-see, shop, eat, and then get back on another bus, for the next leg of discovery.

Sitting atop a bus – if the fickle English weather permits – allows you to see the city’s geography from a great vantage point.

Any list of great places to hop off and visit must include the residence of the Queen, Buckingham Palace – try and time it for the daily Changing of the Guard at 11.30am, though in summer you should aim to get there much before, because of the crowds.  It's all the pomp and circumstance of England at its best, when the guards change duty, with lots of the obligatory marching up and down the courtyard in front of the Palace.

Westminster Abbey and the Houses of Parliament.  Monks first worshipped on the site in the 10th century, and since 1066 Westminster Abbey has been the scene for royal coronations, so the Abbey’s history is an integral part of British history.

Be sure to see the place where the monarchs are crowned, the tombs of generations of the country’s finest royalty, politicians, heroes, writers and poets.  If you happen to be in London in early November, the sea of poppies outside the Abbey, commemorating those who died in battle over the generations is an overwhelming, moving sight.

And yes, Big Ben, when it chimes the hour, sounds exactly the way it does on the BBC World Service.

The Tower of London is one of those iconic places that you have read and heard so much about, and the reality is every bit as amazing.  The Beefeaters, the Tower’s guards, really do wear fabulous Tudor-style dress, complete with ruffles and a black bowler-style hat.  They are a source of stories and anecdotes, and will happily pose for any number of photos.

Be sure to see the Crown jewels, a dazzling collection of the British royal family’s collection jewelry and crowns and tiaras, some of which have delightful signs saying “In use.”

St Paul’s Cathedral
The current structure rose from the ashes of the Great Fire of London in 1666, and is the undisputed pinnacle of Sir Christopher Wren’s talent.

Climb the steps to the Whispering Gallery, and trade whispered secrets across the vast dome while talking to the walls.

British Museum
The British Museum is, without doubt one of the world’s great museums, an extraordinary treasure trove of history, artifacts, documents, sculpture. With over 7 million items in the collection, you can only hope to see a tiny fraction of what is stored here.  The Elgin Marbles, the Rosetta Stone, mummies from ancient Egypt – the scope of history on offer is breathtaking.  And the next thing?  Entrance is free.

Take time out to wander around Trafalgar Square, gaze up at Nelson’s Column, and if you are not museumed-out, then visit the National Gallery.  With over 2000 paintings, from the 13-20th century, yet again, you can only skim the surface of all the gems on display.  Raphael, Rembrandt, Michelangelo, Rubens – all the major European masters are represented, as are the quintessentially English painters such as Hogarth, Stubbs, Gainsborough and, of course, Constable.

Yet again, entrance is free.

You might want to make a contribution to the many free galleries and museums you visit in London.  Upkeep is phenomenally expensive, but it’s entirely up to you whether you drop a fiver in the donations box or not.

And the Parks?  The Zoo?  Shopping on Oxford Street?  A trip down the River Thames?  A show in the West End?  Another pint in a local pub?

At this rate, you might just have to extend your stay.