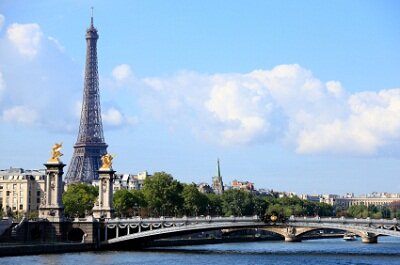 Just that one simple word and the images come rushing, pell-mell, of a beautiful, timeless city – the Champs Elysées, the Left Bank, Montmartre, the view from the top of the Eiffel Tower, which never disappoints, however often one has seen it.

Paris is a magical city to discover, for it has something to offer everyone: superb museums, wonderful shops – though some may just be for window-shopping – restaurants galore, walks along the River Seine, a cup of coffee in a pavement café... it's difficult to avoid the clichés when describing the City of Light.

For the lucky first-time visitor, there is so much to see and do, and for the even luckier return visitor, there are myriad lesser-known facets of the city waiting to be discovered.

So, if you have already visited the Louvre and Notre Dame, and don't want to climb the Eiffel Tower again, here are some suggestions of different places for you to explore.

If a visit to Paris seems incomplete without a walk around a museum, then head for the Musée d'Orsay, which houses a fabulous collection of 19th century art – pictures, sculptures, furniture – in the former Orsay Railway Station.  The building itself is stunning, and in the summer there are wonderful views of the Louvre and the Tuileries Gardens from the roof terrace.  For equally stunning views, take an escalator ride to the roof of another museum, the Pompidou Centre.  From there, not only can you see the panorama of typical grey Parisian roof-tops and chimneys, but you can also look down on the square in front of the museum, packed with entertainers of all kinds, fire-eaters, jugglers, mime artists – a real feast of street theatre.

People-watching & food are two of Paris's favorite past-times, so let's combine the two, by eating in some of the city's ethnic districts.  We'll start the day in true Parisian fashion, however, with breakfast in a local café.  Order a crème, (frothy white coffee), and a croissant, and sit back and watch your French neighbours.  They will be reading the morning paper – Le Figaro for the serious, L'Equipe for the football results, or playing pinball, or talking, which the French do constantly and animatedly.

If you want good Chinese or Vietnamese food for lunch, head off to the 13th arrondissement, where Paris's Chinatown can be found centered around the Avenue d'Ivry. The streets are full of Chinese restaurants and shops, even supermarkets, selling all kinds of Chinese goods, from groceries, tea, and kitchen utensils to silk jackets, music cassettes and newspapers.   If you feel like afternoon tea, you can choose between a typically English spread in the tea-room attached to the English bookshop, W.H.Smith, or head off to the Paris Mosque, a North African oasis in the heart of the student district on the Left Bank.

Have mint tea and wickedly sweet "baklavas" in the cool tea-room or outside in the shady courtyard.  Still hungry?  Well, how about Greek fare for dinner, in one of the many restaurants around Boulevard St. Germain: in the summer, tables are set out on the pavements, Greek music and songs are played, and you could be forgiven for thinking that you had somehow mysteriously strayed from the Left Bank and into the Plaka.

But you haven't yet tried the delicious Jewish 'shawarmas' and pastries, in the Rue des Rosiers, in the heart of the Marais district.  Nor the Lebanese food.  Nor a Korean barbeque.  Nor the increasingly popular Japanese restaurants, many centered around the Rue Sainte Anne.  And what about Italian food?  Oh, and let’s not forget the rightly famed French cuisine...?

It's clear that there will be a great deal of walking to be done, to work off all that food, so put on comfortable shoes, and go explore Paris on foot.  Go right down to the banks of the Seine, and walk along the river, under the bridges, watching the slow barges laden with sand or cement, and the few remaining houseboats, and old men quietly fishing, and, in the summer, people sunbathing.

Paris's best-known churches are masterpieces, and deserve to be visited more than once – Notre Dame, Sacré Coeur, towering over Montmartre, and the magical stained glass of the Sainte Chapelle.  There are also charming, virtually unknown churches, where you will often be the only visitor: in Rue Daru, a stone's throw from the Arc de Triomphe, is the Russian Cathedral of Alexandre Newsky, dark inside with lovely old icons. Across the river from Notre Dame is the tiny twelfth century church of St. Julien le Pauvre, now a Greek Orthodox church, and totally neglected by the crowds visiting its more famous neighbor.

Bon voyage. And as you keep on exploring this fabulous city, and vow to return yet again, remember the charming French saying, “Bonne continuation!”

It's amazing to know now that the Eiffel Tower was very controversial when it was being built. Many French people thought it was an ugly eyesore back then. Little did they know, it would end up being one of the most recognizable, beloved structures in the world. history is fun
April 7, 2012 |