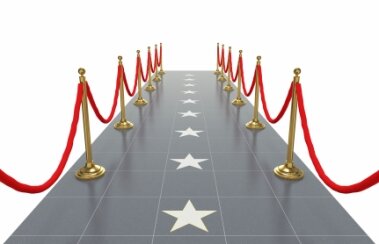 Actually, there are probably way more than 10 things you do not know about the Hollywood Walk of Fame. More like the number of stars in the skies, however many that might be.

The LA-based showbiz tribute has more character than a matinee idol's craggy grin. It boils down to a string of sidewalks along either side of a 15-block segment of Hollywood Boulevard and a three-block strip of another street (Vine). The thoroughly urban landmark serves as a public monument to entertainment industry achievement.

The monument contains more than 2,400 five-pointed fake marble and brass stars embedded at 1.8-meter intervals over a combined 2.7 kilometers. The stars recognize an array of actors, musicians, directors, producers, musical and theatrical groups, fictional characters, and others for their entertainment contributions.

Let's be honest: despite its grandeur, the Walk of Fame is incredibly tacky, but good mileage. Memorize these facts and impress your friends:

1. Each star in the Hollywood Walk of Fame weighs about 136 kilograms.

2. Some entertainment legends are excluded from the Walk of Fame.

Julia Roberts and Clint Eastwood, for instance, have "declined to participate". Nominations cannot proceed without the nominee's consent.

3. Muhammad Ali's inclusion is an example of rule bending. The nomination committee decided boxing could be considered a form of live performance. His star is the first and only one to be installed on a vertical surface. It is displayed on a wall of the Kodak Theatre, in line with Ali's request that his name not be trampled on.

4. The Hollywood Walk of Fame features two Michael Jackson stars: one for the pop star (at 6811 Hollywood Boulevard), and the other for the radio personality (1597 Vine Street). When the prince of pop died in 2009, fans mistakenly left tributes at the Vine Street star.

6. The largest group of individuals represented by a single star is the some 122 adults and 12 children collectively known as the Munchkins, from the landmark 1939 film, The Wizard of Oz.

7. In 1978, in honor of his 50th anniversary, Mickey Mouse became the first animated character to receive a star. Other animated recipients include Bugs Bunny, Donald Duck, Snow White, Shrek, and the Simpson family.

8. Ronald Reagan is the only President of the United States to have a star, and one of two Governors of California. The other is Arnold Schwarzenegger.

10. The most common question put to Chamber officials is (you guessed it): "Why doesn't X have a star?"