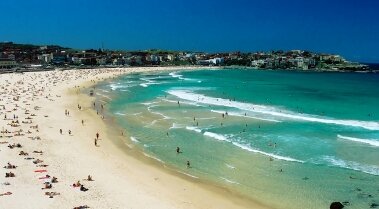 This one kilometer stretch of golden sand loved by all of Sydney is undeniably one of the country’s most famous beaches. The first thing that strikes you as you wind down the busy main road that connects Bondi Beach to the Eastern suburbs of Australia’s biggest city, is the improbability of seeing such a postcard perfect beach, literally fifteen minutes away from the downtown of Sydney, and surrounded by densely populated suburbia.

The name “Bondi” is an aboriginal word that means water breaking over rocks, and I guess it is the unique rock formations, found at either end of the beach that inspired the name. Like most of Sydney’s beaches, Bondi is a surf beach, and for those entering the water sans surfboard, dont even think about swimming outside of the flagged areas, where trained life guards keep an eagle eye on all those in the water. In fact Bondi Beach is where the original Surf Life Saving Club was founded, way back in 1907, and much of the life saving equipment in use on beaches all over the world was invented right here on Bondi Beach.

Clear water and white sand aside, Bondi is much more than just a beach. The thriving cafe scene, multitude of restaurants, hip bars, and regular calender of events and festivals, all combine to make Bondi Beach a cosmopolitan melting-pot not to be missed by anyone visiting Sydney. One of the most popular events to visit Bondi is the annual City to Surf Fun Run, held on the second Sunday of every August. This 14km Sydney race attracts over 60,000 entrants every year, from all over the world. If, like me, you’re more of a spectator than a competitor, don’t miss the Festival Of The Winds, Australia’s largest kite festival, held every September. Easily enjoyed with a glass of cold beer from the balcony of the famous Bondi Hotel.

These are really nice, Ireland has some amazing beaches too, cold tho!
March 8, 2012 |