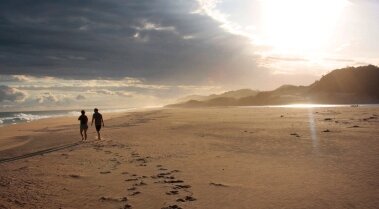 Considered by many to be the most beautiful beach in New Zealand, 90-mile beach offers diverse activities that should accommodate just about anyone. Due to its size (it’s actually only about 60 miles – not that size matters!) this beach is usually quieter than others of its ilk around the world.

New Zealand’s North Island has some of the planet’s most diverse – and freaky – landscapes. Craggy peaks contrast against white-sand beaches and crystal lakes and there are massive sand dunes – the likes of which are only found in movies.  These dunes, however, abound at 90-mile beach and although the climb to the tops of them can be exhausting, the ride down on a rental sled is an adrenaline rush that will not soon be forgotten.

ATV and 4x4 rentals are available for those wishing to tour the expanse of this massive beach in a slightly less breakneck fashion. Still, it’s recommended that unless you’re experienced in this sort of activity, you should take a guided tour as there are frequent episodes of getting stuck in the sand.

Towards the south of the ‘90 miles’ is the world-famous Tauroa Point, where it’s reckoned are the best ‘left-hand’ breaks in the world. On the other end, at the northern-most point of the north island, is Cape Reinga, which is as rich in Maori legend as it is with stunning views over the Pacific Ocean and Tasman Sea.

For those who are in considerably better shape than most, there’s an annual marathon occurring in March that covers the entire length of 90-mile beach (don’t worry, there are options for runs as ‘short’ as 6km.)