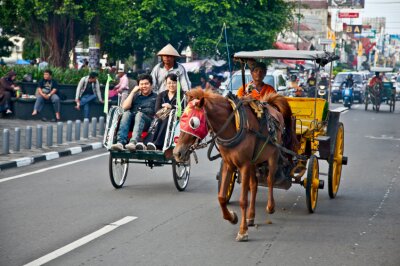 The heart-and-soul of Indonesia, Jogja, as it’s known to locals, boasts a thriving art scene, wonderful architecture, nearby beaches and a heady shopping scene, all in the shadow of the sultan’s palace. It’s a mash-up of old and new, from ancient temples to brand-new shopping malls. If you’re preparing to visit this vibrant city, plan on spending some time in the following neighborhoods:

Jalan Malioboro is the Main Street of Yogyakarta, and it approaches, though doesn’t quite arrive at, the sultan’s palace. This is one-stop-shopping at its finest, and the sidewalks are lined with merchant stalls hawking souvenirs, batik and silver. A lot of tourists are keen to skip Malioboro and purchase handicrafts from the artisan workshops on the outskirts of town. By all means, buy from the source, but that doesn’t mean you can’t browse the wares on Malioboro first. If you do decide to purchase gifts from a street stall, be prepared to bargain. It’s part of the experience, after all.

Malioboro’s touristy, but don’t let that deter you from spending at least a few hours here. This retail district is also anchored by a few air-conditioned shopping malls, which offer welcome relief after a couple hours of exploring outside on foot. Additionally, the fact that so many visitors book rooms around Malioboro means the district stays open a bit later. Plenty of restaurants, street food stalls selling the city’s signature gudeg (a sweet stew made with jackfruit), and bars in Malioboro are open well into the evening.

For hip nightlife, locals will direct you to the Sheraton on the outskirts of town. There are actually a few Jogya hotels in the area, many of which host their own late-night dance clubs. Cocktail lounges and wine bars abound, and one of the main clubs here finishes the evening with a shadow puppet (wayang kulit) performance once the dancing stops.

This trendy alternative to Malioboro is located about 4 km south of the central shopping area. Founded in the ninth century, Prawirotaman was once famous for its cottage batik industry before Jogya’s tourism boom. Today, it’s brimming with cheap accommodation, breezy cafés, bookshops and art galleries.

The influential families that live in Prawirotaman carved out a niche in the local tourism market and so many of the hotels are locally owned by the descendants of families that have been influential in this neighborhood for centuries. Menus in the area feature plenty of international and fusion cuisine, and there’s no shortage of shops selling batik and other handicrafts.

There are plenty of bargain souvenirs to be had farther into the neighborhood, everything from clothing to traditional shadow puppets. Some of the most affordable hotels in Yogyakarta are also in the area. It’s a particularly useful base for travelers saving their budget for the shops in nearby Malioboro.

Named for the street that once ran through it, Yogyakarta’s Chinatown is often overlooked despite its close proximity to Malioboro Street. The Chinese shophouses that line Jalan Ahmad Yani road are a dead giveaway, and this is the place the go if you’re in the market for noodles, herbal medicines or antiques. But buyer beware; a lot of convincing fakes pass as antiques in markets like this, so spend carefully.

Pecinan also hosts Chinese festivals during important seasons, and during these times the neighborhood springs to life. Also, if you’re hungry, stop by Djoen, a famous local bakery with nearly 100 years of history.