« Five Great Things to do in Munich for Free | Main | Agoda: Top 10 Things to See in London »
Wednesday 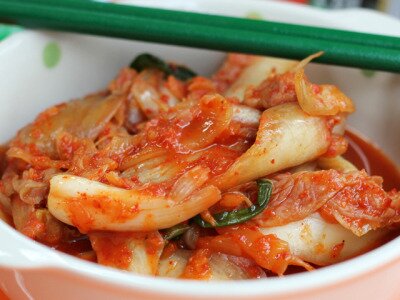 It’s safe to say that almost every Korean meal you will ever eat will include kimchi. Kimchi is a fermented dish that can be prepared with a choice of vegetables such as radish, cucumber, or cabbage. The vegetable is cured with salt and loaded with dry chili flakes, then left to sit for a few days until mild fermentation begins to occur, the level of bitterness being determined by how long the fermentation process is. When you eat a Korean meal, kimchi is served as what’s known as a banchan, or a small side dish. Despite being considered only a condiment to complement a main course, kimchi is often considered to be the national food of South Korea.

Kimchi has a long and interesting history, which dates back to the 7th century. Winter in Korea is extremely cold, and in order to have vegetables to eat throughout the long winter in the past, certain vegetables were pickled with salt to preserve them. Although bright red spicy chilies are ubiquitous to many variations of kimchi now, they were only added to the recipe in the 18th century when chilies were introduced to Korea.

As mentioned before, kimchi can be made with a variety of different vegetables, but the most common is napa cabbage. The traditional method of preparation is to take whole heads of cabbage, rinse them in salt water, and then coat each leaf in a paste made with garlic, ginger, onions, and plenty of salt. The cabbage then sits for two to three days so it becomes slightly fermented and the leaves become wilted and pickled. The vegetables are then sliced into bite sized pieces, and placed on a small serving plate to complement the main meal.

Along with being eaten with every meal, Kimchi is also used in cooking to add flavor to many popular dishes. Jjigae is a red soup made with pork and usually lots of kimchi, and simmered in a scorching hot earthenware bowl. Other dishes like kimchi fried rice have also become local favorites.

But kimchi is not only a delicious addition to a meal, it also is extremely nutritious. For starters, almost every ingredient has noted health benefits, and the finished product includes high doses of dietary fiber, vitamins C and A, calcium, and iron, as well as several types of beneficial acids and bacteria. The dish is often included in lists of the world’s healthiest foods, and during the SARS outbreak in Asia in 2003, many people even credited kimchi for protecting them from the virus!

Kimchi is an important part of every Korean meal, and it’s also a huge part of the local culture. Life in Korea seems to revolve around this spicy pickled vegetable, and eating a meal just wouldn’t be complete without one or even a few varieties of kimchi. With its great health properties and ability to deliciously complement the flavors of every meal, you will never be far from a healthy dose of kimchi during a visit to Korea.

Along with being eaten with every meal, Kimchi is also used in cooking to add flavor to many popular dishes.
July 12, 2014 |