« Big City Transit: Munich | Main | Family travel to the Los Angeles area – What are some of the best places to stay? »
Thursday 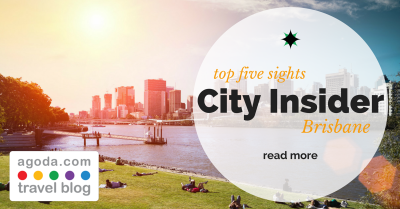 Sydney, Melbourne, and Gold Coast are the cities that come to mind when people think of Australia. But it would be a shame to forget Brisbane! The seaside city of 2.2 million offers plenty to see and do, a relaxed lifestyle, and an abundance of energy. These have combined to make it one of the fastest-growing cities in the country. The city launched its new slogan at the beginning of 2014 — Give me Brisbane any day. After spending any amount of time here, you’ll be sure to agree. If you do decide to visit, make sure to hit up these five spots before heading back home.

Since Brisbane is known for its lovely subtropical climate, you’re going to want to spend as much time outdoors as possible. A perfect place to enjoy the weather is at the City Botanic Gardens. Dating back to the 1850s, it’s a luscious and fertile 50 acres that is perfect for a lazy picnic. If bringing your own food seems like too much trouble, you can just pop into the City Garden’s café for lunch before you stroll around the grounds. And for those who prefer a night-time wander, they have you covered — the gardens are open 24 hours a day.

If you’re a fan of creativity and fresh ideas, a stop at Brisbane’s Gallery of Modern Art is a must. This stylish, new gallery is situated in Stanley Place and looks just like you’d expect a cutting edge art gallery to look — modern and artistic. Inside is just as nice, if not nicer, and the exhibitions cater to everyone’s artistic tastes. Make sure you check out their website (http://www.qagoma.qld.gov.au/) to find out what the latest exhibits are. As a bonus — free Wi-Fi throughout the gallery!

Another great place to enjoy Brisbane’s weather is the South Bank Parklands. Situated on the banks of the Brisbane River, the Parklands boast a diverse range of cafés, restaurants, flora and even a beach. Developed for the World Expo 88 and officially opened in 1992 the Parklands have quickly become a popular location for tourists and locals alike. Depending on when you visit, you might be able to catch one of the many music or art festivals that are held throughout the year. If you happen to visit at dusk, be sure to jump on the Wheel of Brisbane, a 60-meter-tall Ferris wheel – to get a fantastic panoramic view of Brisbane as it starts to shine.

If you’ve done a bit too much relaxing and crave a bit of excitement, head to Storey Bridge to take part in the Adventure Climb for a hit of adrenaline. Storey Bridge is located over the Brisbane River running from Captain Burke Park to the Howard Smith Wharves and provides a heart pounding vantage point with a 360° panorama of Brisbane. The climb takes you across the top of the bridge and offers a dizzying view, so make sure that you’re not afraid to heights! It’s a popular attraction, so it’s probably best to go here and book in advance.

Okay, Brisvegas isn’t really a place as much as is it a nickname, a reference to the city’s live music scene and the perception that its nightlife is either tacky or superbly entertaining — depending on who you talk to. Head to Fortitude Valley or the West End to find great food, awesome live gigs, and thumping clubs that rival those in any of Australia’s major cities, and in some cases, eclipse them. No matter what your tastes are, you’ll be pleasantly surprised to find that Brisbane will exceed your expectations.